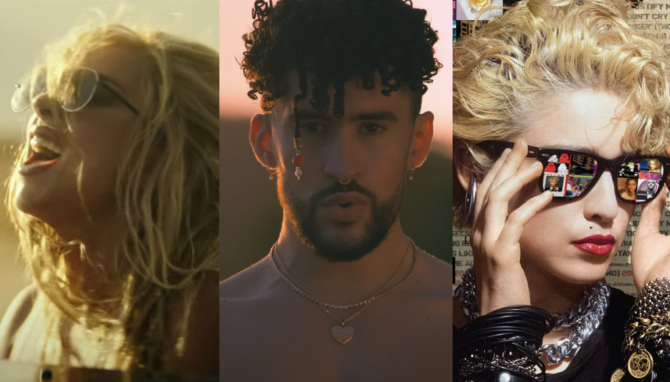 Between the leaked SCOTUS majority opinion draft on Roe V Wade and anti-LGBTQ Rep. Madison Cawthorn‘s disturbing face humping video, it’s been a tough week–heck, it’s been a tough month… and we’re only a few days in. Thankfully, the weekend is here, the temperature is rising, and a few of our favorite artists are back to help you shake it all off and dance your heart out. Here are the new pop music drops we’re turning the volume ALL the way up for…

Queer ally, one-time drag performer, and general thirst-trapper extraordinaire Bad Bunny is back with a new album, and the vibes are immaculate. Benito has traded a lot of his more driving beats out for a chill, just-this-side-of-trance sound perfect for blissing out in the sun while you wait for your tan to set in–and clocking in at 23 tracks, this record should have us set through to the summer.

“Hold My Hand” by Lady Gaga

Gaga goes full stadium bombast on “Hold My Hand”, an anthem worthy of her 2017 Super Bowl performance. It almost sounds like it was ghost-written by her A Star Is Born character Ally Maine, much closer to “Before I Cry” than to her most recent work Chromatica. Coincidentally, the Super Bowl and A Star Is Born were probably her biggest forays into playing to the hetero crowd until this song, which is the lead single off the soundtrack for the new Top Gun movie. Honestly, if this paycheck is big enough to go towards bankrolling her next era, we’re all for it.

Carly has officially entered her own Solar Power era. “Western Winds” serves as yet another entry for us to help the straights see that Carly is so far from a one-hit wonder. She let us know on Dedicated Side B that she doesn’t hate California after all, and now she’s feeling her Californian oats more than ever. All our love to the gay retail workers everywhere who can be sure to hear this carefree tune for the next few months.

Swifties everywhere are sifting through their playlists and replacing one of Taylor’s loveliest ballads ever with her officially owned version. This release brings us one song closer to the full release of 1989 (Taylor’s Version), a Best Album winner and general Swift-stan foundational text featuring moments like “Blank Space”, “Bad Blood”, and noted ally anthem “Welcome To New York”. We’re not entirely sure why 1989 (Taylor’s Version) is so far being released in random movie trailers (Spirit Untamed and The Summer I Turned Pretty? Sure!), but we’re just happy it’s on the way.

Move aside Taylor, there’s a new pop queen re-releasing her hits with wildly long titles! With this remaster, Madonna is here to remind us all what got us so deeply into the groove in the first place. Her remix album Finally Enough Love drops June 24, and with remixes of all-time gay club favorites like “Hung Up”, “Like A Prayer”, and “Express Yourself”, the renaissance is all but inevitable–not that our Madame X ever went anywhere!

guess who got a new bb gun pic.twitter.com/4gzExqWS8C

Pop prince and #1 gay Twitter menace Lil Nas X has tweeted a snippet of his next song and fans are already screaming. Between the “Montero” music video and his slightly chaotic verse on an SNL Pride song, his next project is sure to serve more than a little fruit juice. It’s only been a couple of weeks since his new tour announcement (in which he, in usual fashion, joked that “everyone’s allowed except gay people”), so we may have a whole new crop of hits to live for by the time he hits the old town road in September.

Let us know if there are any major bops we missed this week. Happy listening!