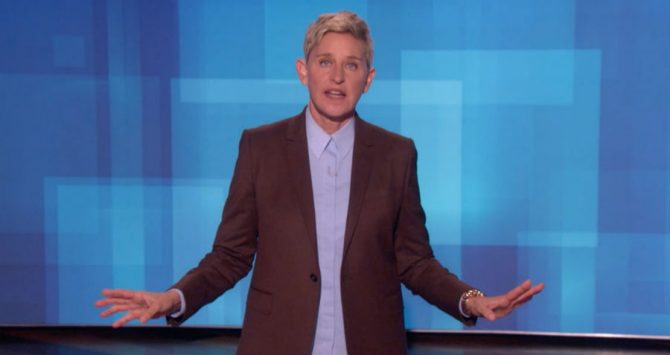 Ellen Degeneres just can’t seem to catch a break these days. After a string of negative stories in the press, calls for her talk show to be yanked off the air are gaining momentum.

Last month, the beloved TV host became the target of an internet smear campaign when she was accused by several former employees of being secretly mean. A week after that, she was criticized for joke she made about being in quarantine.

While broadcasting her first show from the living room of her $24 million mansion, Ellen compared being on lockdown to being in jail where everyone is gay, saying: “This is like being in jail, is what it is. Mostly because I’ve been wearing the same clothes for ten days and everyone in here is gay.”

Related: Ellen just compared quarantining in her $24 million mansion to being in jail where “everyone is gay”

The joke was met with a major backlash, with many calling out the comic for cracking a passé joke about prisoners being gay and making light of a deadly global pandemic. Now, a Change.org petition is calling for the comic to be fired from her job and replaced with a different Ellen.

Last year, DeGeneres received criticism for her friendship with former president George W. Bush, despite his antigay political stances, and NFL superstar Drew Brees, despite his decade-long partnership with antigay hate group Focus on the Family.

She also took heat for defending Kevin Hart’s messy homophobic past, going so far as to say she accepted his apology on behalf of all LGBTQ people everywhere.

Meanwhile, Page has developed quite a reputation in recent years for being an outspoken advocate for LGBTQ issues and for speaking out against homophobia.

In February 2019, she famously confronted actor Chris Pratt for his affiliation with Hillsong Church, a notoriously homophobic  house of worship that supports conversion therapy and bans queer people from holding office.

“If you are a famous actor and you belong to an organization that hates a certain group of people, don’t be surprised if someone simply wonders why it’s not addressed,” she tweeted. “Being anti LGBTQ is wrong, there aren’t two sides. The damage it causes is severe.”

She also called out the Trump Administration’s for inciting hate crimes, accused director Brett Ratner of bullying, and has confronted several antigay trolls in person.

So far, the Change.org petition drafting Page to replace DeGeneres has garnered over 8,000 signatures and counting.

Subscribe to Queerty for a daily dose of #entertainment #change.org #ellendegeneres stories and more