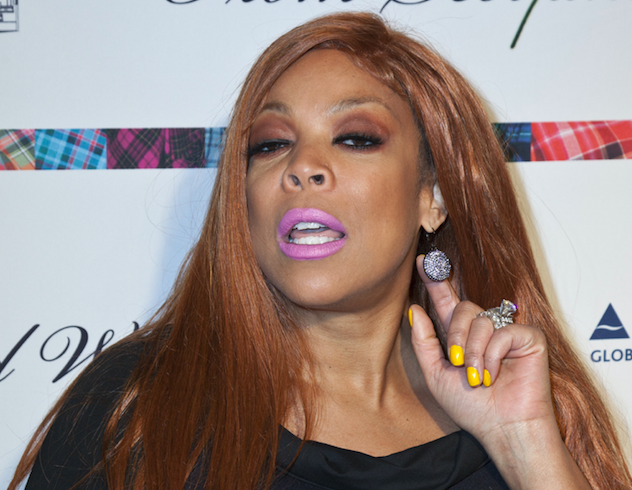 Last week, Williams drew criticism when she said gay men shouldn’t wear skirts and that anyone who doesn’t menstruate will “never be the women that we are.” After a backlash ensued, she issued an apology saying she would “do better.”

Her efforts were short-lived, however, because this week, she made a truly vile joke about the death of celebrity therapist Dr. Amie Harwick, who was likely pushed off her balcony by a stalker ex-boyfriend.

Harwick was once engaged to The Price is Right host Drew Carey, which inspired Williams to connect Harwick’s falling death/murder to the tagline, “Come on down!”

You could hear a pin drop in the studio after she makes the joke:

Amie Harwick, the ex fiancée of Price is Right host Drew Carey was tragically murdered last week, after an ex threw her off a 3rd floor balcony! ? Leave it to talk show host Wendy Williams to throw in a tasteless joke about this saying “Come on Down!” ? pic.twitter.com/XPKKgiF6Et

People were understandably angry when Williams made the remark. And they’re still angry today. In fact, they seem to be growing angrier.

#CancelWendyWilliams Any person that makes a joke about a murder of a woman and domestic violence should not be getting paid money to do so.

Waiting for the next heartless unsympathetic apology video from #WendyWilliams I'm sure this one will be uninspired and full of fake tears too!!! #CancelWendyWilliams pic.twitter.com/G95xX5VzBq

@WendyWilliams really gonna make fun of gay men, cleft lips, and someone getting murdered? #FireWendyWilliams from her show and the public in general https://t.co/Vz1KnK4HT6

Hey @WendyWilliams– CLASSLESS MOVE making a joke about a domestic violence victim. Amie Harwick, an amazing woman and champion for mental health awareness was senselessly killed and you used it as an opportunity for a one liner. HOW FUCKING DARE YOU. @FOXTV

Her show needs to be terminated @FOXTV She is a disgusting human. #FireWendyWilliams

Dear @FOXTV we all know that you are not addressing the improper conduct of @WendyWilliams because she is a #BlackWoman and you are #DyingForDiversity but this is not it. 1/

@FOXTV When will enough be enough? How much bad press does @WendyWilliams have to bring before you cancel her show? Better people have been let go for less. It’s time to step up or just say it’s ok. “How you doin’?”

@WendyWilliams is such trash. Makes fun of Joaquin Phoenix and gets a way with it. Makes jokes about the death of Amie Harwick? Is she going to get away with this? @FOXTV remove her immediately. #FireWendyWilliams

On top of that, an online petition calling for Williams to be fired has garnered almost 100,000 signatures.

The petition was originally started last month when Williams made fun on actor Juaquin Phoenix’s cleft lip but has since seen a resurgence of signatures after what happened this week.

Neither Williams nor Fox TV has issued any comment on this latest controversy.

As of now, The Wendy Williams Show, now in its 11th year, will remain on air through the 2019–20 television season.