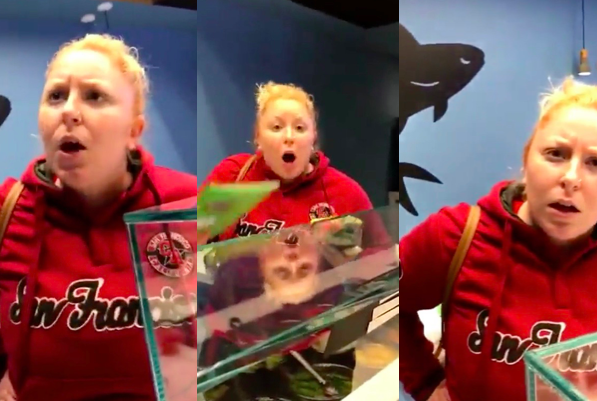 Storelli was recently waiting in line at a restaurant in Santa Monica when she saw a couple behind her kiss. She was so offended by it that she felt the need to throw an epic, seven-minute, profanity-laden tantrum that puts Jennifer “literally-the-bitch” Boyle’s Michael’s meltdown from last November to shame.

But here’s the real crazy thing: The couple Storelli got so upset about, to the point of feeling she might “vomit,” was straight. Usually this stuff only happens when gay people do it. But Anna, apparently, finds anyone–gay, straight, whatever–kissing in public offensive. So much so that she called the female partner a “slut,” a “prostitute,” a “b*tch,” an “ugly b*tch,” and “the ugliest b*tch I’ve ever seen.”

Related: The year’s most deplorable and bigoted outbursts caught on camera

She also threatens to report the couple to the police for “doing prostitution in public,” then accuses them of “sexually harassing” her, then she says, actually, they weren’t making out, they were “having sex” in front of her, then she demands a refund from the restaurant, threatens to have the cashier fired, and calls 9-1-1, but not before boasting that she is a proud “American.”