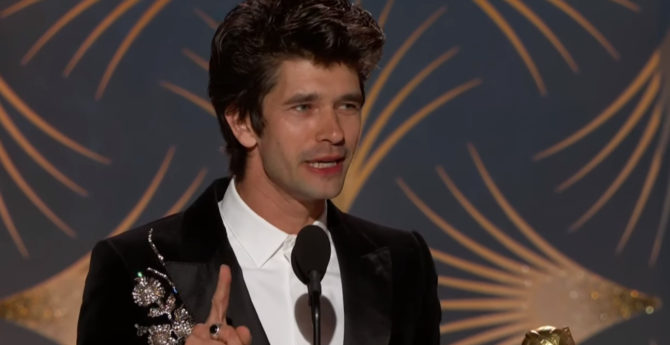 Striking another blow for visibility, Ben Whishaw took home a Golden Globe for his supporting performance in A Very English Scandal Sunday night.

Whishaw, who also stars in Mary Poppins Returns, scored his Globe for his portrayal of Norman Josiffe (also Norman Scott), a model and former boyfriend of MP Jeremy Thorpe (portrayed in the series by Hugh Grant). (As an aside, we adored Whishaw as a waifish, sensitive gay man in London Spy last year as well.)

Based on a true story, A Very English Scandal recounts the so-called Thorpe Affair. The 1976 scandal saw Josiffe try to out Thorpe as a gay man, which began a war of sorts between the two men which culminated in violent acts. The British tabloids went wild over the story, which ultimately cost Thorpe his political career.

In his acceptance speech, Whishaw paid tribute to Grant, writer Russel Davies (who also is gay and created the UK Queer as Folk) and director Stephen Frears. He saved his kindest words, however, for Josiffee himself who he commended for “taking on the establishment with courage and defiance” to inspire others, referring to Josiffee as a “queer icon.”

Whishaw dedicated the award to Josiffee, who now lives in relative anonymity in the UK.