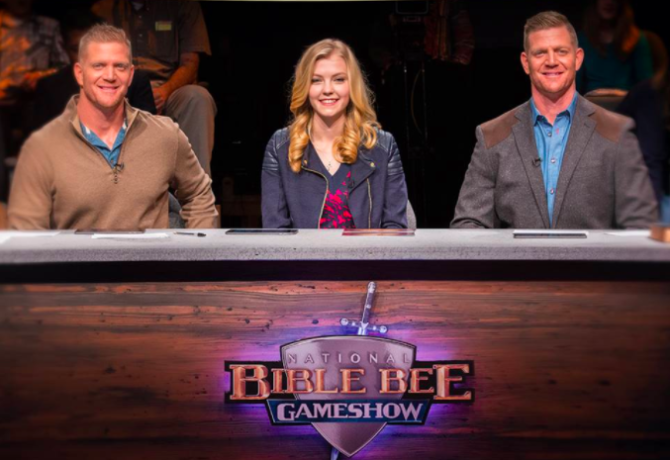 Get ready for a 30-episode “game show” all about the Bible!

In what is being billed as “a first for Facebook Live,” the The National Bible Bee Game Show premieres on Facebook Live tonight and will feature over 70 contestants competing for a total of $270,000 in prizes by showing off their “Scripture-knowledge” and reciting over 800 verses from the Bible which they’ve committed to memory.

“The National Bible Bee Game Show stirs up fun, excitement, and a lot of ‘intended consequences’ in homes worldwide,” Cameron says in a statement.

“It’s a perfect combination of entertainment and edification,” Zwayne adds. “The goal really is to encourage young people in their efforts to understand God’s Word and to inspire them to internalize it, and then to impact their lives.”

The Benham Brothers are also totally stoked about it.

“And to do it with that level of boldness and confidence is truly inspiring!” his twinsie Jason adds.

According to producers, at least 25% of Christians don’t actually read the Bible (Really?! We’re shocked!!), so they wanted to offer an entertaining way for “whole families [to] get into God’s Word to compete together or to cheer on contestants from home.”

As for why the show is premiering on Facebook Live and not, say, a real TV network, producer Bobby Downes says, “Facebook Live is the future of television. It allows us to choose our audience, pick the airtime and, most importantly, engage with the viewers as they watch this incredibly inspiring competition. Over the span of this show we anticipate 30 million people will tune in.”

So far, a Facebook event page for tonight’s big premiere has 234 RVSPs.

Check out the trailer below. Or don’t.