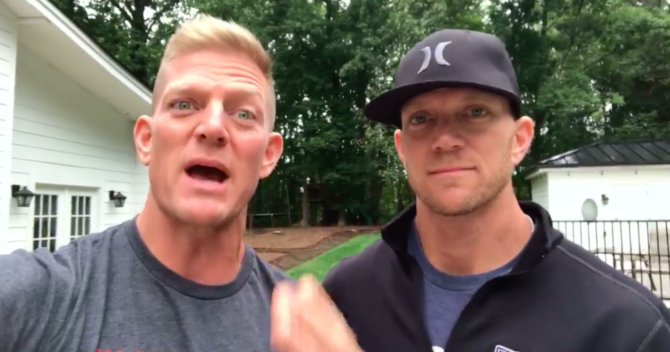 After taking some time off to promote their crappy amateur baseball memoir, the Benham Brothers are back to writing scathing antigay op-eds for World Net Daily.

Their latest one is all about the three stages of today’s “radical sexual revolution,” otherwise known as the gay agenda.

“The three stages of today’s radical sexual revolution are as follows: Marginalize, demonize and criminalize,” the brothers boldly state in the opening of their new think-piece.

What follows next are several more paragraphs of completely incoherent nonsense.

“We’ve said repeatedly that this agenda went from acceptance, to appreciation, to celebration, and now to forced participation,” the twinsies continue. “There will never be enough ground given until the beliefs of those who hold to biblical moral values are criminalized to the fullest extent of the law.”

Take, for example, Jack Phillips, the Colorado baker who refused to bake a wedding cake for a gay couple, was sued for discrimination in the U.S. Supreme Court by the Colorado Civil Rights Commission, then won the trial on the grounds of religious freedom.

The Benhams say, despite his major court victory, Jack is still somehow a victim.

“There is absolutely no question the sexual revolution is in full criminalization mode today,” they write. “And the proponents of it want Jack Phillips–and any other person who refuses to bow to this agenda–out of business and/or in jail.”

Ummm… except that Phillip won the trial, which is pretty much the opposite of him going to jail.

But that’s not even the real issue here, the brothers say.

So what is the real issue then, you ask?

“The real issue here is not the realization of the true colors of this revolution–we’ve known their destructive agenda for a long time (because we know who it is that is truly behind it: the one who robs, kills, and destroys),” the brothers write.

“The real issue is whether or not Americans will stand with Jack Phillips against this brutal and vicious attack … and by default, stand with countless other Americans that will be criminalized in the future.”

Except, as we’ve already established, Phillip won his trial, which means he was not “criminalized” in any way, shape, or form. At least, not from a legal perspective.

“The time has come for everyone to get informed and be a voice,” the twinsies conclude. “If this revolution–propped up and supported by the mainstream media–continues unchecked, there will be no freedom of conscience left for anyone!”