Kim Kardashian sat down with Big Boy’s 92.3 Los Angeles radio show to discuss her recent feud with Tyson Beckford, during which she chose to make take a homophobic dig at the model after he made a rude comment about her body.

It all started last week when Beckford made an admittedly snarky remark about Kim’s physique in a photo of her on Instagram.

“Sorry I Don’t care for it personally,” he wrote in the comments under @amiradyme’s post. “She is not real, doctor f*cked up on her right hip.”

The Trump-supporting reality star clapped back, “Sis we all know why you don’t care for it,” implying that Beckford is gay. 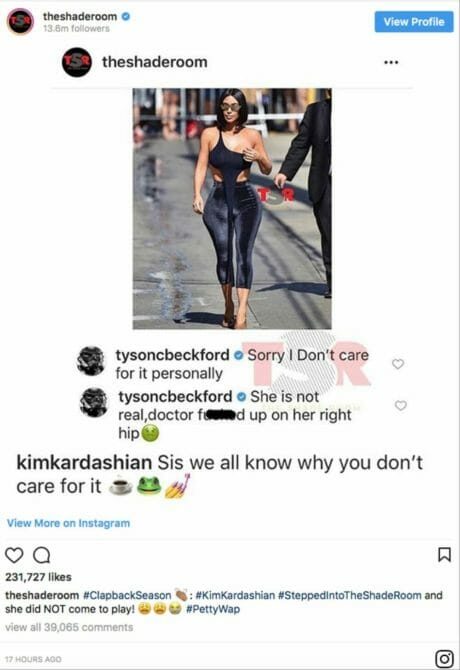 Kimberly’s homophobic comment didn’t go over so well with the masses.

Disgusted by @KimKardashian and her homophobic clapback at Tyson Beckford insinuating he’s gay. Stop using someone being gay as an insult. Your point is moot anyway because being gay is not an insult. My #LGBT friends are amazing! If only closed minds came with closed mouths.

Speaking to Big Boy, Kim refused to entertain the idea that maybe, just maybe, her comments were homophobic.

“Really, dude? Like, you’re going to body-shame me? Like, okay, okay, okay sis,” she said. “When I choose to clap back I don’t do it to people who I know are just looking for the come-up. I want to say something so badly. I’ll end you.”

She continued, “People were sending me stuff on his page, he keeps on going and going and going, and I’m just like, ‘dude, that’s so female lame’ that’s just lame to me. And for anyone to say that I am homophobic with the comment of saying ‘sis’?”

“All my best friends are gay,” Kim said. “I support the community. I love the community, they love me, that has nothing to do with this.”

#KimKardashian went in on #TysonBeckford in her interview with @bigboy