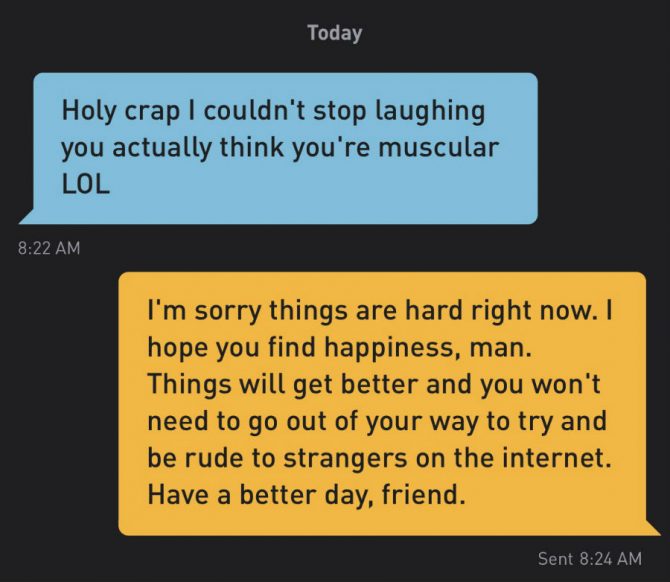 A gay man has seen a tweet go viral after it touched a nerve with many others.

Jono Mitchell is a filmmaker and actor based in Atlanta, Georgia. Mitchell has used the last few months to lose weight and tone up (unlike many of us who have been comfort-eating our way through the pandemic!). Having lost 70lbs, he’s feeling great about himself. So, when a guy messaged him on Grindr to inform him that he shouldn’t describe himself as muscular, he was not having it.

Mitchell took a screenshot of the exchange (above) and posted it to Twitter. At the time of writing, it’s had 6,100 likes and prompted hundreds of comments. 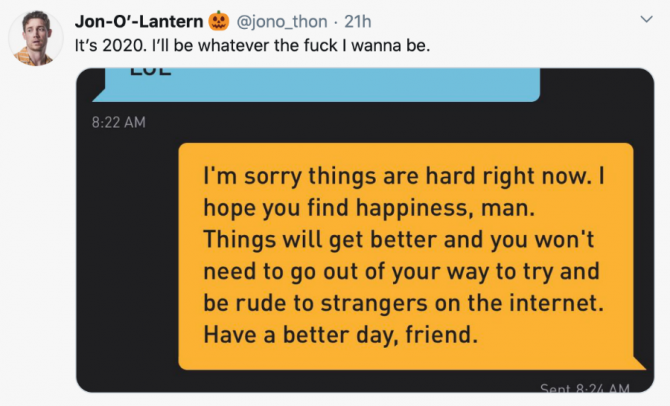 Mitchell replied, “I’m sorry things are hard right now. I hope you find happiness, man. Things will get better and you won’t need to go out of your way to try and be rude to strangers on the internet. Have a better day, friend.”

On his tweet, Mitchell accompanied the screenshot with a caption: “It’s 2020. I’ll be whatever the fuck I wanna be.”

Most of those commenting expressed sympathy with Mitchell and applauded his response.

He just knows you’ll never fuck him so wants to be rude before he gets rejected… tale as old as time pic.twitter.com/UYLjwziZOy

Wow… first of all, his message was gross. Second, I admire the maturity in your response.

We are different types of people but this is such a universal issue with people. Especially men, who have some sort of insecurity, need to put others in their place. It’s gross. Sorry he said that to ya and keep on being what you wanna be!

He’s trash. You’re beautiful. And that was a waaaaaay kinder response than he deserved.

In a message to Queerty, Mitchell confirmed he’d had no interactions with the other man before receiving his message.

“My assumption is he reached out after searching for “muscular” profiles. I have that listed in mine because I recently lost 70lbs and am in the best shape of my life.”

Did the other man respond to Mitchell’s message?

“After my initial message, he chided me for ‘misleading people’ by listing that I was muscular when I wasn’t and then repeated how laughable it was before blocking me.”

Mitchell says he was surprised the tweet had gone viral: “But I guess it just goes to show how prevalent this sort of behavior is for everyone. I wish we were in a place where we could stop commenting on one another’s bodies altogether, but insecurity in all of us won’t allow that to happen. I worked in the public eye for many years and am no stranger to dealing with trolls. People tear each other down to make themselves feel tall.”

Another recent tweet from Mitchell detailed his weight loss journey.

How it started. How it’s going. pic.twitter.com/ncRgVnIxtH

Think you can hurt my feelings? For four years I hosted a live show that let me interact with viewers in real time for a network with one of the most toxic fan bases of any network on television.

I am equipped to handle anything.