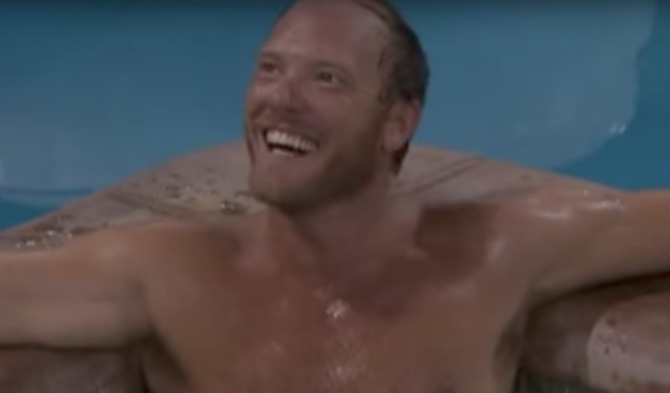 Nobody expects the cast of Big Brother to raise the bar of TV intellect, but a recent transphobic incident on Season 19 shows a particular disregard for empathy.

During Sunday night’s live feed, contestants Jason Dent and Cody Nickson spend a soak session debating the gender of a contestant from a previous season.

They were joined in the hot tub by fellow contestants Jessica Graf and Matt Clines, when Graf mentions Audrey Middleton, the show’s first trans contestant.

“She was the first transgendered cast member,” Graf says.

Then Dent goes in.

“What the fu*k does that mean? She was a she?” Dent asks.

Nickson adds: “It was a dude dressed up as a woman.”

“Okay it was a dude,” Dent instantly concedes.

Graf finally chimes in: “You guys are walking such a thin line.”

“What? That’s what it was,” Nickson replies.

Later in the conversation when Graf uses a “she” pronoun, Dent interjects: “Okay, but it was a he. Was it a he first, or a she first?”

It’s one thing to misgender out of ignorance, but it doesn’t take an emotional genius to know people shouldn’t be referred to as “it.”

After the episode aired, Middleton posted a worthwhile message on Twitter addressing the incident:

“You are not born with emotional intelligence, you are conditioned to have it. The people who lack it are the one who are too afraid to try to understand what value it truly has. If you are someone who is radically opening yourself to things you will live the most purpose filled life of all,” Middleton writes.

My thoughts on what was said on the #BB19 live feeds about me ????? pic.twitter.com/A95x3AOYuh

If this is indeed just ignorance, here’s hoping these two have truly taken the opportunity — along with Middleton’s even-keeled response — to really educate themselves on a human level.

The ball is in their court if they want to make it right, but we aren’t exactly holding our breath.

As far as tuning them out entirely, however, how can change come about without a little friction?

The scene is below: