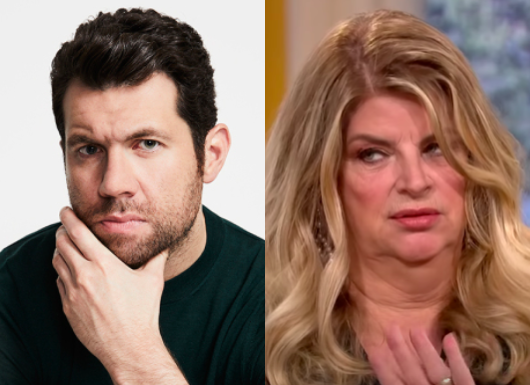 Earlier this week, Alley had a meltdown on Twitter over the Oscars’ new diversity requirements for movies that want to be considered for Best Picture.

In a since-deleted rage tweet, the 69-year-old former actress wrote, “This is a disgrace to artists everywhere. Can you imagine telling Picasso what had to be in his f*cking paintings. You people have lost your minds. Control artists, control individual thought… OSCAR ORWELL.”

After deleting that tweet, she posted another one that said, “I’ve been in the motion picture Academy for 40 years. The Academy celebrates freedom of UNBRIDLED artistry expressed through movies. The new RULES to qualify for Best Picture are dictatorial.. anti-artist.. Hollywood you’re swinging so far left you’re bumping into your own a**.”

(Fun fact: At no point in her 40 year career has Alley ever appeared in an Academy Award-winning film.)

Well, Eichner wasn’t having any of Alley’s crap. Yesterday, he tweeted: “Honestly just doing what I can to get Kirstie Alley to block me again.”

Honestly just doing what I can to get Kirstie Alley to block me again.

The tweet is a reference to the time he and Alley, who endorsed Donald Trump in 2016, got into a Twitter spat over the 2017 shooting of Louisiana Rep. Steve Scalise.

At the time, Eichner tweeted: “Congress didn’t care when 20 young children were shot dead at Sandy Hook. Will they care when one of their own gets shot? I doubt it.”

Alley responded to Eichner’s tweet by calling him “weird creepy sad and irreverent” (we think she meant “irrelevant”) and saying she was glad she didn’t know him personally (which sorta begs the question why she felt the need to reach out to him in the first place, but whatev).

Weird creepy sad and irreverent .. Basically a fucking soulless tweet.. I don't know you Mr. Eichner and for that I'm fortunate. https://t.co/Ii7SN8PKH4

Then, at some point, she blocked him. Because this past April, Eichner posted a screenshot showing he had been cut off by the Celebrity Big Brother 22 contestant.

Have a wonderful day. pic.twitter.com/1jibm5Maq8

When asked by a follower about it, Alley, who frequently bemoans cancel culture and criticizes others (read: liberals) for never giving conservatives a fair chance to speak, responded by saying that it must have been an “error.”

Since attacking the Oscars for being more inclusive, Alley has walked back her criticism, saying she supports diversity and inclusion, she just doesn’t like when it’s “mandated.”

I deleted my first tweet about the new rules for best movie OSCARS because I feel it was a poor analogy & misrepresented my viewpoint. I am 100% behind diversity inclusion & tolerance. I’m opposed to MANDATED ARBITRARY percentages relating to hiring human beings in any business.

Related: Kirstie Alley takes a break from promoting hydroxychloroquine to invite Tulsi Gabbard to hang out