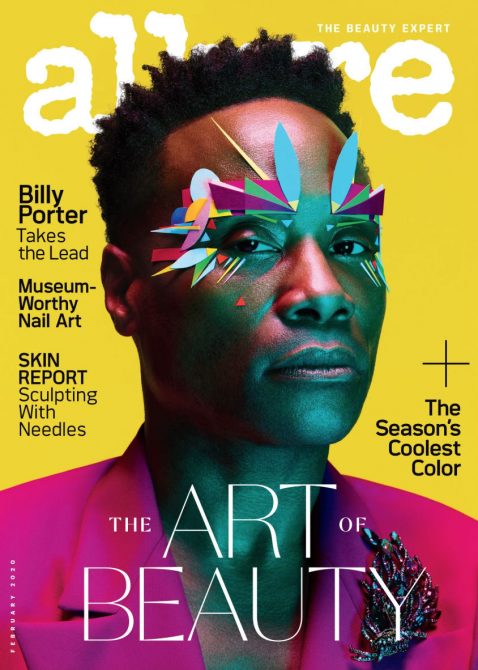 Actor and performer Billy Porter has made history as the first man to star on the cover of beauty magazine, Allure.

The front cover and interview was unveiled yesterday.

In the striking cover photo, shot by Ben Hassett. and styled by Nicola Formichetti, Porter has geographic shapes of colored paper around his eyes. Inside, fashion images show him draped in diamonds and wearing glitter lipstick.

Related: Billy Porter opens up about how homophobia almost ruined his career

The magazine, which was founded in 1991, talks to him about his love of making a splash on red carpets.

But it also delves into the gay actor’s past. He offers a story from his youth that many other queer people may identify with, recalling how his parents thought that he needed ‘fixing’ when he behaved differently to other little boys.

“The hetero normative construct that masculinity is better silenced me for many years. It was like my masculinity was in question before I could even comprehend the thought. I was sent to a psychologist at five years old because I was a sissy and my family was afraid.

“That’s one of the first memories I have as a child, that something’s wrong with you and you need to be fixed based on ‘You’re not masculine enough.’ I carried that with me for my whole life until, like, two and a half minutes ago.”

Porter tried to achieve success as a singer in the 1990s but his music career didn’t take off as he’d hoped. He says some in the music industry dismissed him as being too flamboyant.

“Flamboyance was a silencing mechanism for a long time with me. Flamboyant was code for ‘You’re a faggot, and we don’t want you.’ Flamboyant was a word that was used to marginalize me and pigeonhole me and keep me in a box. You get in the room, you give them flamboyant, and then they come back to you with, ‘He’s too flamboyant.’ And that’s when I started to want to murder people.”

Porter, 50, was raised in Pittsburgh, PA. He first found success as a singer and actor on Broadway. He has enjoyed wide fame since being cast in the FX show Pose in 2017, for which he has won Golden Globe nominations and an Emmy award.

WATCH: Gaga’s ‘Rain On Me’ routine almost ends in tragedy for one fan

WATCH: Hollywood Hills house parties under COVID are getting ‘out of control’