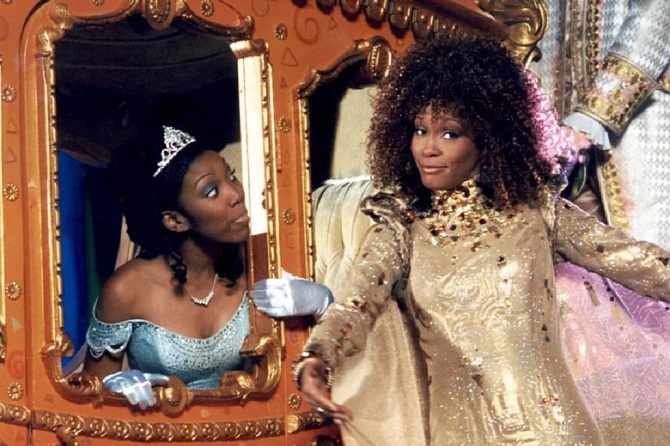 With the world celebrating the release of Amazon’s new, reimagined version of Cinderella, complete with Billy Porter in a gown, we think it time to turn back the clock to another reimagining of the classic story…one which both Porter and director Kay Cannon cited as major inspiration.

Cinderella raised a few eyebrows when it landed on ABC back in 1997 for some unconventional casting choices. Detractors blasted the series for using a diverse cast of actors, and for casting an African-American woman in the title role, labeling the film “politically correct.” How little has changed in 20+ years, with defamers attacking the new version for casting a Latina lead, and portraying the Fairy Godmother as gender fluid.

The 1997 version, produced by Whitney Houston, starred Brandy in the title role, and utilized the classic music of the Rogers & Hammerstein stage version. We don’t really feel a need to recap the story here, though we will note that this version reimagines Cinderella as a woman pining for her independence, and her Fairy Godmother as a sassy, sisterly figure, inspiring her less to win a man than to believe in her own abilities. The new version also borrows from an innovation made in this 1997 version: the Prince and Cinderella don’t fall in love at first sight. Rather, they meet in advance and find one another attractive through conversation. The change enhances the relationship, as well as both characters.

As for the performers, who could resist? Brandy shows off a thereto-unseen level of vocal gifts tackling the Rogers & Hammerstein score, and Whitney Houston gives arguably her best performance as the Fairy Godmother. The pair’s soaring duet “Impossible” still gives us goosebumps. With a supporting cast that also includes Whoopi Goldberg, Jason Alexander, Bernadette Peters (cast against type as the bitchy Stepmother) and Victor Garber, this witty, sparkling version of the tale paints each character with vibrant personality.

Viewed more than 20 years on, Cinderella still charms with its music, production design, and extraordinary performers, not to mention a few updates that enrich the characters. The movie doesn’t need to be literal-minded when it comes to casting. This movie knows finding performers to embody each character will enchant an audience without question.

Impossible? We know what Whitney’s Fairy Godmother would say…

Streams on Disney+ and Amazon.