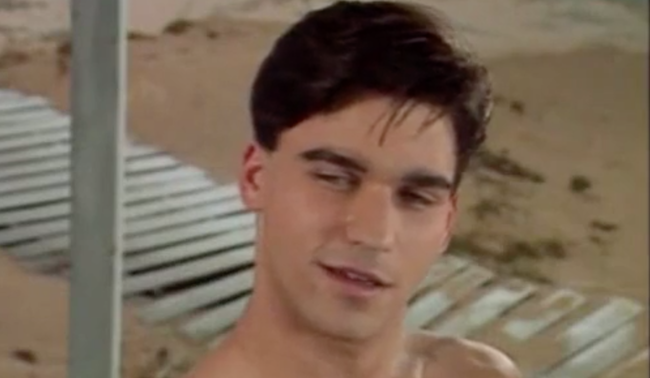 “Maybe you have to loosen up a little. Y’know… Get down.”  — Joey Stefano, Idol Eyes

The film will span Stefano’s discovery by drag superstar/director Chi Chi LaRue, his prolific adult film output, his cameo in Madonna‘s Sex, and the drug overdose that killed him at age 26.

Visage has been cast as Anita, a fictitious OTT television host that’s weaved throughout the film to tie everything together.

Alaska will be cast as Gender, a make-up artist who performed in a band called Johnny Depp Clones with Chi Chi Larue and Chris Green.

In the ’90s, he was one of the adult world’s most famous stars, alongside Ryan Idol, Jon King, and Jeff Stryker.

Stefano’s life was a troubled one. Born Nicholas Anthony Iacona, Jr., he began drinking heavily at the age of 15 to cope with his father’s death. He left rehab, arrived in LA, and quickly made a name for himself in adult films like Hole in One and Sex in Wet Places.

According to Michael Musto:

Joey did illustrious work in films like Tijuana Toilet Tramps and onstage he was known to gracefully put beer bottles up his butt by way of entertainment. (“Heinie-kins,” I wittily dubbed them).

He had no filter — or self-consciousness — and made his antics seem so not dirty that he became irresistible to men of all social stations.

So it wasn’t completely shocking when — during a Florent dinner I happened to be at in 1990 — Joey said on camera to cable guy Rick X that gay mogul David Geffen was a client.

On top of the 58 adult films he starred in, he also made an appearance in Madonna’s “Deeper and Deeper” video.

In November 1994, Stefano was found dead in a motel room from an overdose of cocaine, morphine, heroin, and ketamine.

In order to make the film, director Chad Darnell spoke to over 50 sources over three years to better understand the actor’s life.

The film is expected to be released next year.