Dean Atta, a writer named one of the most influential LGBT people in the UK by the Independent on Sunday and dubbed “one of the UK’s finest poets” by Time Out London, contributed a poem titled “How to Come Out as Gay” to this year’s anthology Proud.

And in this PinkNews video, Attas reads his poem as The Black Flamingo, “a character I’ve created to celebrate being black and queer.” (The Black Flamingo is also the title of his debut novel, published this August.)

“Being black and queer means being doubly fabulous!” he says with a laugh. “But also, the intersections of homophobia and racism do affect me.” 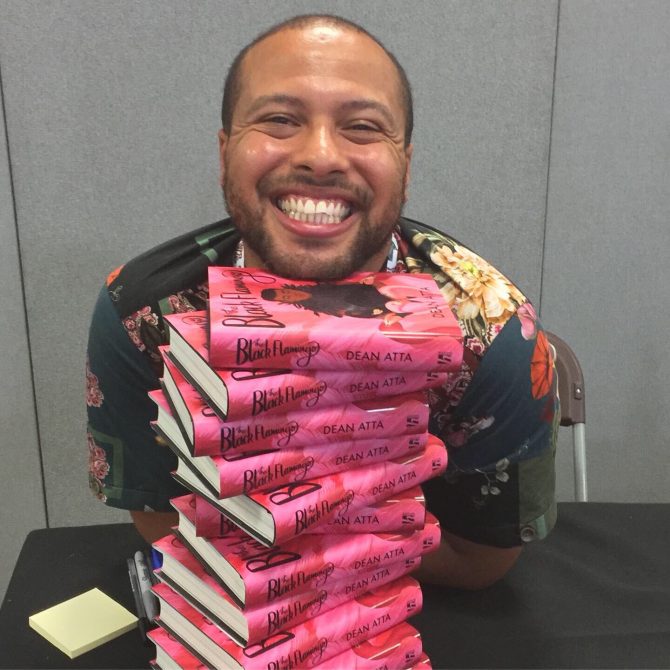 He explains that he belongs to many communities he feels “very empowered by and supported by, where I found so much strength and see that so many people have struggled in order for me to stand proud as a black, gay man.”

“For me, coming out was kinda incidental to liking a boy and wanting to ask him out on a date or to be my boyfriend,” he reveals. “And I got rejected. He said no. But I was then out.”

“The thinking behind my poem … is advice I would give to my 15-year-old self. I wanted to send the message that there’s no right way to come out or no right time to come out. It’s just when you feel ready.”

Here are more of Atta’s words to the wise, transcribed from his reading of the poem:

“Don’t worry: It’s okay to say you’re gay and later exchange it for something that suits you, fits, feels better.”

“Be a bit gay. Be very gay. Be the glitter that shows up in unexpected places.”