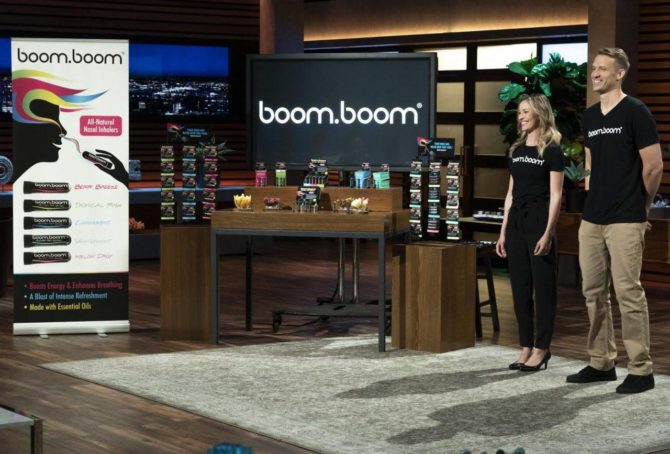 A straight couple who recently appeared on ABC’s Shark Tank, a reality show where entrepreneurs pitch their inventions to a panel of CEOs who then decide whether to invest in their products, thinks they’ve come up with the best idea ever!

Chelsea and John Pinto are the proud inventors of Boom Boom’s Energy Nasal Inhalers, which they say are a “new best friend for your nose” that, when inhaled through both nostrils, create a “cooling, tingly sensation that makes you feel alive.”

The inhalers are made up of four ingredients–menthol, peppermint oil, eucalyptus, and natural flavoring–and provide a “natural, refreshing boost that can improve one’s attitude and enhance an overall feeling of well-being.”

The episode actually aired back in October, but it recently went viral after a gay man shared the clip on Twitter along with the caption: “Did Shark Tank Do Poppers???”

The answer from other gay men: A resounding yes.

Granted, poppers are made out of amyl nitrite, not essential oils, but the basic concept is the same.

They knew what they were doing when they called it tropical rush ?

How are they always behind 500 years

“it does open you up”

oh you know he has experience w poppers

In the words of willam, “2 hits and anything fits.”