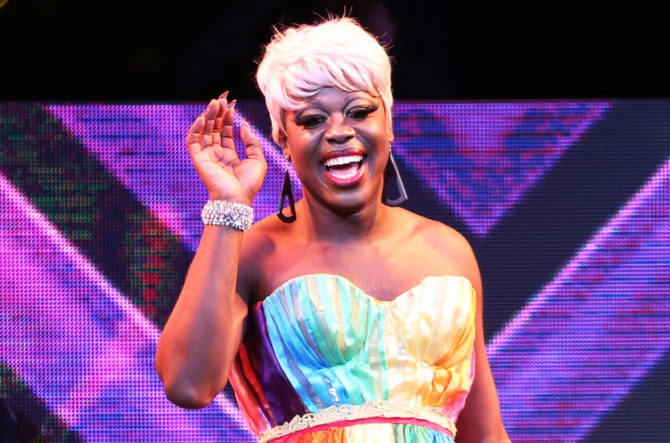 Georgia-born Bob the Drag Queen took the world by storm when he appeared on RuPaul’s Drag Race, season eight, which he’s used to become a fixture of the drag scene and a worldwide equality advocate.

Queerty caught up with Bob to chat about sex, HIV testing, drag and all things fabulous.

I really like the Joker from the Batman series.

I love that he’s kind of an agent of chaos. Even though he’s crazy, he seems really fair in his madness.

Rainy Tuesday night, you just got home from a trip and there’s nothing on the schedule for the next couple days. What do you do?

There’s no constant answer. I mean, I do a number of things. I’d probably call some friends to have them come over and watch some Apple TV or I might battle myself about whether I should go to the gym. Deciding whether or not to go the gym is actually a really big part of my life. (Laughs) 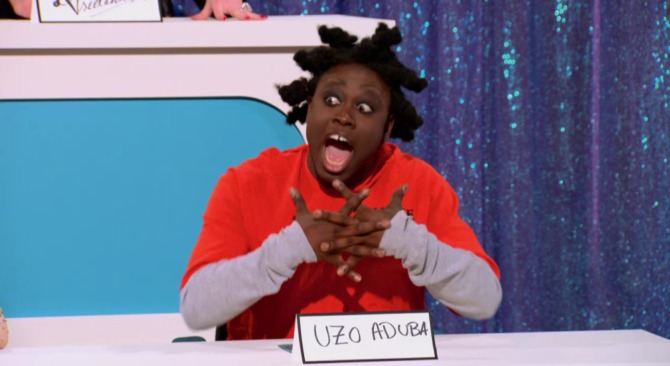 Do you have any favorite podcasts?

I’m so basic. I really love This American Life. It’s probably my favorite podcast. I also love S-Town, which is a one season podcast, brilliant. And I also love Conversations with People who Hate Me with Dylan Marron. It’s a guy who explores people who write really hateful things on the internet, and then he calls them out on it.

The Will & Grace reboot works because of Grace and Karen. You have an assistant named Luis. Is your relationship at all like that of Grace & Karen?

Well Luis is not an independently wealthy socialite. And I am not a interior designer with eccentric yet questionable fashion sense. So we’re really nothing like Grace and Karen when you break it down. [laughs] Nothing like Karen and Grace.

Drag is  entertainment, but it’s also sociopolitical commentary. What role do you think drag queens have in generating social change? Do they?

What’s the role of the drag queen in creating social change?

Awesome, awesome. You speak so self-confidently. What’s the origin of your self confidence? Is it your mom? I know she ran a drag bar at one point.

Yeah. People always ask me that, and I’m not sure how to answer that question to be honest. I mean, the source of my confidence? I don’t know. I mean, I grew up in a time where confidence was a thing that was drilled into our heads as a kid. Love yourself. Believe in yourself. I feel like nowadays, that’s changed. It’s all about humbling yourself, and saying  that you’re not great. And like, all these people, they just post pictures of themselves online and say something derogatory about themselves in the comments.

They’ll post something like, Had a great day even though I look like shit. And then the comment section is all like: No, no, no, you look great. Which is cool, I guess, but, I don’t understand why you’d post a picture of yourself and say I look like shit. It seems to be really popular to do these days. I don’t know. I don’t know how that got into the zeitgeist. 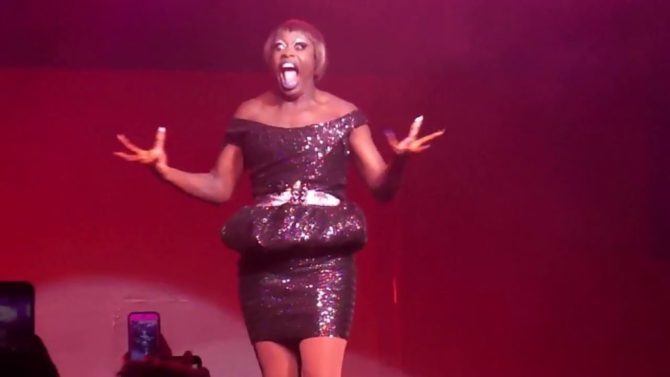 On the topic of self-care and confidence, you’re a big advocate of owning your own sexual health via HIV testing and not feeling shame about the topic. How have you applied that to your own life?

Well, you know, first of all, sexual shame—shame around what you do in the bedroom, or shame around who you’re attracted to. Wait. Hold on one second–I’m putting on my eyebrows.

There you go. Talking while doing your eyebrows can be a disaster! You know, shame around who you’re attracted to, around what you like to do in the bedroom. It’s a tale as old as time. I think that if you allow yourself to release that shame, you’ll have better sex, better interactions. Unless shame is your kink, then go for it.

But you’ll have better interactions with people during sex, and as long as you and your partner are both comfortable and enjoying yourselves–then you should go for it.

How do you think we should navigate this kind of conversation? It’s still really delicate.

Getting tested and talking about sexual history, HIV, or testing in general. Some guys get really upset if you even bring it up. It freaks them out.

I don’t even know. How much easier can we make getting tested? You go to a gay pride parade and there are three test logo vans all the time.

You can spend $40 to go down to the pharmacy and get OraQuick and find out your status in 20 minutes. Like, at the height of the AIDS epidemic, it wasn’t so easy to get tested. You didn’t find out right away. You found out by phone call two or three days later.

Yeah. Sometimes longer that that. It would take weeks.

Yeah, and nowadays, people roll their eyes when they have to wait while their friends march down the street because they don’t want to miss out on brunch. Which is crazy to me. I just find it interesting. I’m not religious, but there is a passage in the Bible that says people’s hearts have been hardened so they can’t get a message.

Or something to that effect.

I feel like if you’re queer in America today, and you aren’t hearing the message of HIV awareness and prevention, then you’re just closing off your ears and don’t want to hear it.

But there’s still a lot of stigma about HIV. And prevention strategies need to be tailored to different racial or economic and gender groups.

Well, it’s also still considered a gay man’s disease when of course it’s not. So people are less apt to get tested if they don’t consider themselves gay men. Which is really not how HIV works, you know what I mean? It doesn’t care who you are. I mean the thing is that most people who transmit HIV don’t even know they have it. I don’t know how much people realize, if you’re on the right medicine, and you’re undetectable, it’s basically impossible to transmit HIV to your sex partners. But people don’t know that. Back in the early 2000s, people started to learn that it wasn’t a death sentence, but now, like, the truth is hepatitis will kill you faster than HIV could ever. People with HIV live totally normal long lives. I’m surprised that the stigma hasn’t lifted as much as it should have by now, in my opinion. But who am I, just a drag queen?

Not just any drag queen. You were in Drag Race finale this year, everyone was just blown away by how mainstream drag has become. Is it less subversive as a result?

It is, in theory, less subversive. But I don’t think it has lost anything, really. I’m also not one of those folks who’ll stop watching a band when it becomes popular–know what I mean? 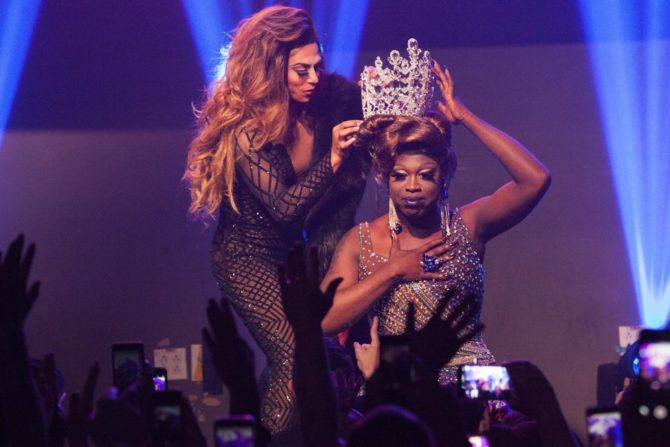 What do you think drew you to drag and comedy? It’s the perfect combination.

I always loved laughing. That doesn’t make me unique; that makes me like everyone else in the world. Pretty young in life I found out I was a funny person, and I had the ability to make people laugh. And then when I saw drag, it looked like so much fun. Then I actually gave it a shot, and I was like oh my god. I didn’t know I could be this good at anything. I’d finally found something that I was really thriving at, and it just became my passion. If I liked bodybuilding as much as I like drag, I’d be huge! Know what I mean? If I put in all the hours I’ve put into drag into bodybuilding, like, I’d be a monster. 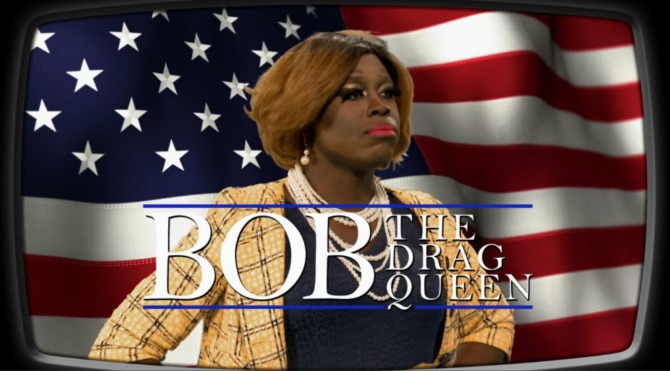 I don’t have a bedside table. I have a footstool by my bed, and the only thing on it is the cord for my charger. I don’t really decorate at all. I don’t have many pictures on my wall. I don’t own a single lamp in my entire home. I have a very minimal apartment, not because I’m like some minimalist designer. It’s because I’m really bad at decorating, and I never have the time, need, energy or desire. So my walls are white. All the furniture is black. And my apartment is really not exciting. It’s really, really not exciting. Like, at all.

It’s ok. To each their own…

I wish my apartment was cooler, and I thought about hiring an interior designer, but I guess I don’t wish bad enough.