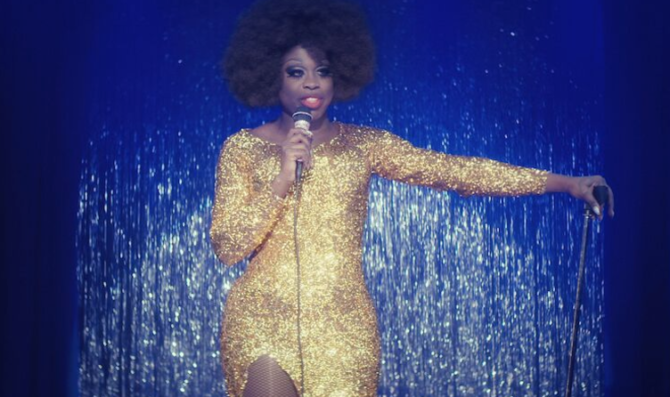 Before Bob the Drag Queen became America’s next drag superstar, he was performing standup comedy as Christopher Caldwell. The premiere season of RuPaul’s Drag Race in 2009 inspired him to step into his first pair of heels, and soon he was performing under a new name — Kitten with a Whip. He later become the first winner of RPDR whose drag was a direct byproduct of the hit reality show — and he surely won’t be the last.

We caught up with Bob to talk about his new film, Cherry Pop, and what his year as reigning queen of Drag Race was like. Along the way we heard about an on-stage mishap that’s tough to top.

Cherry Pop will be screened in Los Angels at OutFest on July 10, and at San Francisco’s Castro Theater on July 11.

You were so great in High Maintenance  last year, and now with Cherry Pop coming out, does this mean we’re going to be seeing you act more?

Well I went to school for acting, so I was acting before I ever stepped foot in heels. I was also recently on a show called Playing House,  I was in the movie Rough Night — I’ve done quite a bit of TV actually.

Where’d you go to school?

Tell us about your character in Cherry Pop — Kitten.

The film is about a drag queen performing for the first time, which tends to evoke a mixture of liberation and terror. What was the first time you performed in drag like?

The first time I ever performed — there’s a video online — was at a show called “Funny Drag Queen, Part One” at the New York Comedy Club, and I did some standup comedy. I was very excited — I wasn’t nervous, I was excited.

And is that still online?

[We saved you the hassle of searching — here’s the video:]

What’s it like these days being so comfortable in your act, and knowing that before you even step out on stage, that audience is going to be putty in your hand? How has that changed the relationship between performer and audience for you?

Well it makes me feel very powerful and it’s a constant struggle so I don’t abuse that power. It’s pretty exciting to have a built-in fan base from my previous work, and I don’t take that for granted.

So how do you still take risks as a performer?

It’s actually really funny — my comedian friend Matteo Lane, he takes me around New York City and we do standup shows out of drag for straight people who don’t know who I am so then I can just be, you know, Chris the black dude as opposed to Bob the Drag Queen.

Do you ever have that cliché standup experience of bombing on stage when you’re out of drag?

You know, I’m not being funny, but I don’t think I’ve ever bombed.

Oh! I did once piss myself onstage in Atlanta. And by “once” I don’t mean like years ago, I mean like two months ago.

Yeah, I was onstage and I had to pee and I was like, I can either ruin the show and leave, or I can finish the show. So I thought to myself, “I’ll just let out a little bit of pee and no one will notice”, because I’m wearing a gown and it’ll get stuck in my tights and my pads and I’ll just go home and wash my clothes. Well, no gurl, I looked down and I was standing in the River Jordan. But my set was hilarious and the show was great.

And can we find a video of that online?

There’s video but you won’t know that I’m peeing myself. It was just me and the girls onstage and a couple of audience members who ran to the front of the stage like, “Oh my god, is that a puddle?”

Puddles aside, what’s the last year been like for you as reigning queen?

It’s been a great year. They say heavy is the head that wears the crown, but I’m glad I finally got rid of that crown — my neck was starting to hurt. You don’t realize how many people are really affected by RuPaul’s Drag Race, just living out loud, as Brooke Candy and Sia said. When you live your life out loud, you encourage other people to do the same.

What message did you hope to bring with the title?

I’ve always had a very simple goal, which is entertain people, make people laugh, and give back to the community. I think I did all of those.

What do you think the ever-widening Drag Race audience needs to hear moving forward?

Well different people need to hear different things. But stories, real stories, which is why I say Drag Race is the most important show to queer culture because it actually talks about real life experiences — queer people and trans women of color.

Peppermint’s story line this past season was pretty incredible for that reason. I was thinking about the fact that so few people who watch Drag Race have probably ever heard from a trans woman so intimately, let alone someone who’s POC and also does drag.

Yeah they say about thirty percent of people in the world know someone or is close to someone who is gay, but less than one percent of the world considers a trans person a close friend. So that’s pretty important that we get those messages out there.

Another way you make a difference — something you mentioned earlier — is making people laugh their asses off, which is so thoroughly needed right now. I understand you have a comedy special coming out soon — can you tell us a little about that?

It’s called Bob the Drag Queen: Suspiciously Large Woman, and it is about my views on politics, celebrities and white people.

In. That. Order! It talks about my experience as the winner of RuPaul’s Drag Race and as a black gay man in America. And I’m very lucky, it’s going to be airing on Logo in July, on Out TV in Canada and South Africa, and it’s going to be streaming worldwide on REVRY.

Here’s a story I heard, and tell me if I’m in the right ballpark. You used to perform on gay cruises.

Yeah I still do.

Oh OK. So the story goes that before you were on Drag Race, you were playing a gay cruise that Kathy Najimy (King of the Hill, Sister Act, Hocus Pocus) was also on, and after your set she loved you so much that she called RuPaul and told him something like “I just found the next winner of Drag Race.” Any truth to that?

It’s true! She saw me perform on a cruise to Cozumel, Mexico and she thought I was really great and after my show she said “Meet me by the french fries” — I’ll never forget that line. And I did meet her by the french fries, and she called RuPaul from the cruise ship, used her international minutes, to call and say “I found the next winner of your show.” Low and behold, she was right.

He didn’t answer though. It was a voicemail.