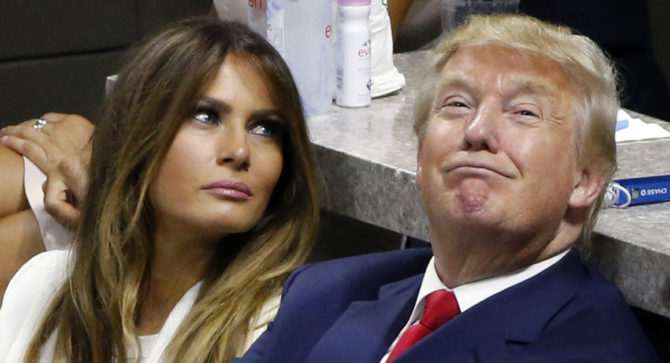 Six days ago, many people’s worst nightmare came true. Donald Trump was sworn in as the 45th President of the United States of America. As that terrifying fact starts to sink in, the analysis can begin.

Susan Constantine is a communication and body language expert who has trained U.S. government departments and top lawyers. She recently spoke with Mic about her observations of Donald and Melania Trump at last week’s inauguration, and what their body language says about the couple.

It’s Constantine’s professional opinion, based on close observations of last week’s inauguration festivities, that Melania is more of “an object” to her husband than a wife or even a human being.

Speaking specifically about the moment when the Trumps were greeted by the Obamas at the White House entrance, Wood says, “Not only did he not wait, he went up the stairs and greeted the Obamas. He didn’t even look back to see if she was there or help her up the stairs.”

“He does not, as she comes to his side, hold her, greet her, bring her in close,” she elaborates. “He does a quick glance as if she was anybody and he doesn’t touch her.”

And then there was that super awkward inaugural dance.

Wood points out that Melania leaned away from Donald throughout most of the dance. “That typically says, ‘I don’t want to merge with you as a partner,'” she explains, adding that as the couple uncomfortably rocked back and forth, the First Lady held her fingers out straight, which can be a subtle indicator of a lack of affection. Meanwhile, Donald kept “pulling her in sexually,” touching her pelvis to his.

So what does this all mean exactly?

In a nutshell, Wood says that Donald Trump’s body language rarely changes, regardless of the situation, which, while disturbing, “can also read as authenticity,” she says. “He’s the same wherever he is, in whatever situation he’s in.”

Gotcha. So basically, he’s never not an asshole. And as for Melania, she remains a bit of a mystery.

how dare she
7 comments

how dare she
7 comments