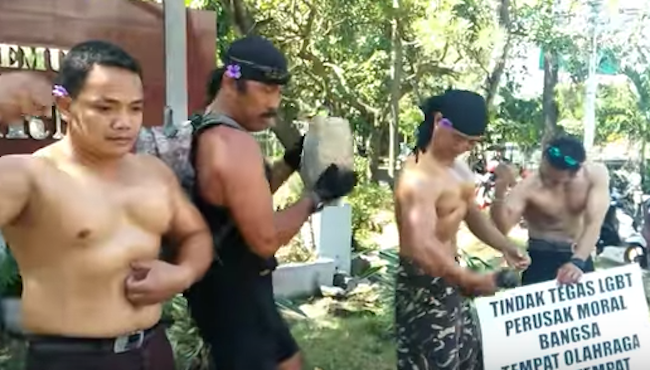 When bodybuilders get together, it’s usually to discuss smoothie recipes and compare fabrics for competition posing trunks.

But a recent meeting of muscular minds in Indonesia had far more sinister intent: a modestly attended but rabidly antigay protest complete with signs reading “Do not let Indonesia become Sodom and Gomorrah” and “Gyms are not a place of sin.”

Proving that modern life has become a ham-fisted satire that’s trying too hard, the four bodybuilders illustrated their antigay sentiment by attending the protest in Jakarta shirtless, flexing, and all greased up in baby oil. They stopped just short of fellating one another.

Related: Can you see the painted bodybuilder in the barely-there bikini?

At least one can applaud their body-positive and inclusive message as to what kind of physique qualifies one as a “bodybuilder.”

The Gaily Grind reports the protest was in response to a recent raid in Jarkata that found police arresting 141 men in a popular gym/sauna. The men inside were accused of violating pornography laws and running a gay prostitution ring.

Proving again that Indonesia has their signals mixed up regarding the whole gay/antigay paradigm, police reportedly forced the men to strip down for photographs and then published them alongside the men’s names and places of residence on social media.

In conclusion, everything is weird.

Ttake a look at the bodybuilder protest below, and marvel at the fact that they wear flowers in their hair: