Major stuff is going down at Bon Appétit. The popular food magazine is dealing with a number of scandals, including one involving its drinks editor, Alex Delany.

This week, Delany issued an apology after a picture of a Confederate flag cake he baked ten years ago resurfaced online.

The photograph was originally shared to Tumblr on July 24, 2010 when Delany was just 17 years old. In the post, he wrote that he made the cake because his best friend was moving to South Carolina.

“To honor her new home, my friends and I felt the need to express some southern heritage in cake form,” he wrote. “Such a glorious cake for such a sad occasion.” 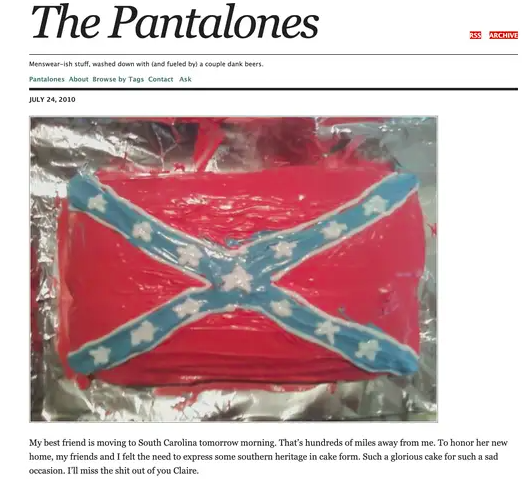 In his apology on Tuesday, Delany explained that he wrote the post when he was a teenager. Still, he called his actions “despicable” and “shameful” said he should have known better, adding that he “cannot apologize intensely enough.”

“I know it doesn’t cut it, but I am truly sorry,” he wrote. “The significance of the failure is not lost on me.”

That may have been the end of it… Until a Vine video of Delany using an antigay slur then surfaced online later that day.

In the video, which was recorded when he was 20, Delany asks “You guys wanna see a bunch of f*ggots lying on top of each other?” before the video cuts to a pile of sticks.

Bon Appétit’s senior food editor Andy Baraghani posted a lengthy statement about the video to his Instagram story, calling the video “hurtful and triggering and all too familiar.”

“There is a vine circulating around the internet in which my colleague, @alex_delany, uses a gay slur. I don’t know how much more hurt I can take at the moment,” Baraghani  wrote.

He continued, “The word takes me back to being bullied and harassed as a kid. To my adult years dealing with the kind of toxic masculinity that I experienced in kitchens and the workforce. It’s not a term I will tolerate. It’s never appropriate.”

Shortly after the Vine video resurfaced, so did a bunch of old tweets and more old Tumblr posts written by Delany.

This time, he was caught making disparaging remarks about women, including joking about having sex with underage girls, complaining about women being too “vanilla” in bed, and trashing gender studies classes.

sure seems like @alex_delany has a lot of thoughts about women pic.twitter.com/wMVH5PySaE

Twitter has had a lot to say about the matter…

I’m pretty sure he does deserves to lose his job. Please take a look at the hurt it caused his colleague Andy Baraghani via his IG page

When I saw that video of Alex Delaney saying f**ot it felt like a punch to the gut. In a way it felt like hearing a close friend say something homophobic (which I know is kinda insane)

Come on. Come ON… I was rooting for you. I really was. At 17, 10 years ago, you baked a confederate flag cake…

It was a bad choice, but something you can atone for.

Your ‘bundle of sticks’ vine though… that’s not cool. That one was recent and hurt.

So you’re telling me Alex Delaney has both made a confederate flag cake and used the f-slur in a video as a “joke” and instead of addressing it he has now deleted his Twitter and blog. Gross. #BonAppetit

Alex Delaney getting cancelled for saying f*ggot on his vine account and making a confederate flag cake I’ve always had a feeling about him too I did! I did! It’s true!

But not everyone feels Delaney should be fired, noting that he was very young at the time and that people change and should be allowed to atone for their mistakes.

Alex Delaney from Bon Appetit made a few insensitive and “edgy” jokes when he was 17 and 20, respectively. Are we seriously cancelling him over that?? He’s 27 now folks. People can grow. Delaney obviously isn’t racist and homophobic.

People are really trying to get Alex Delaney canceled over a goodbye cake he made as a teenager?

If BA Twitter actually cancels Delaney over the cake pic from god knows how long ago that’s ridiculous. Dude has been pushing for donations and action since protests started and anyone who thinks a joke tumblr post actually represents his politics is just looking to hate him

Alex Delaney was a kid when he made some jokes. He wasn’t a grown man. Do not cancel Alex. I am a gay man of color and I stand by him. Not everyone deserves to canceled. If he does where do we stop. We will all be canceled. We all have done dumb things.

Neither Delany nor Bon Appétit have not issued any comment on the Vine video or his past remarks about women.