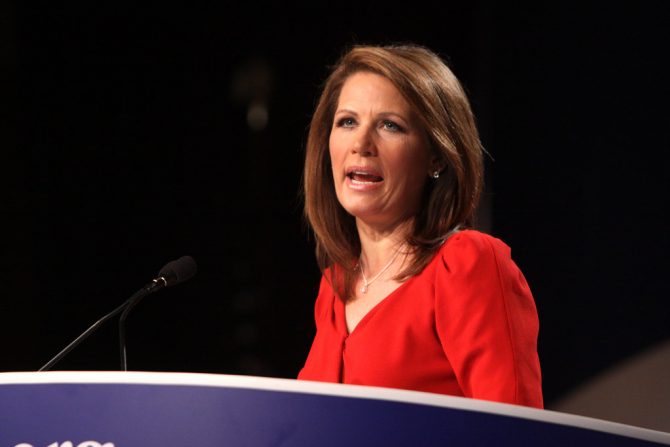 Still coping with the defeat of Donald Trump in last week’s Presidential Election, former Minnesota Congresswoman and Republican Presidential candidate Michelle Bachman has turned to the internet in an unhinged new video.

Bachman posted the video to social media, where Right Wing Watch helped it go viral. In it, a crazed Bachman prays for God to “smash” Joe Biden and Nancy Pelosi.

“Smash the delusion father of Joe Biden as our president,” Bachman howls. “He is not. Would you take your iron rod and smash the strong delusion that Nancy Pelosi does have her House of Representatives. We don’t know that! Smash it, in Jesus’s name! Smash, lord, the takeover of the U.S. Senate by Chuck Schumer. Smash it with your iron rod!”

Former congresswoman Michele Bachmann calls on God to "smash the delusion, Father, that Joe Biden is our president. He is not." pic.twitter.com/gqoFP97ipT

Well, somebody should smash some delusion where Bachman is concerned.

Michelle Bachman rose to national prominence in 2012 when she ran an ineffective and bizarre campaign for the Republican Presidential nomination. Both she and her husband, Marcus Bachman, came under fire for operating a Christian counseling center that practices conversion therapy. Tthough Marcus Bachman holds a PhD., he is not a licensed clinical psychiatrist in the state of Minnesota. Michelle Bachman has previously attacked LGBTQ people on numerous occasions, labeling homosexuality a sexual dysfunction and equating queer people to pedophiles. Earlier this year, she also claimed “transgender black Marxists” were plotting to overthrow the US government.