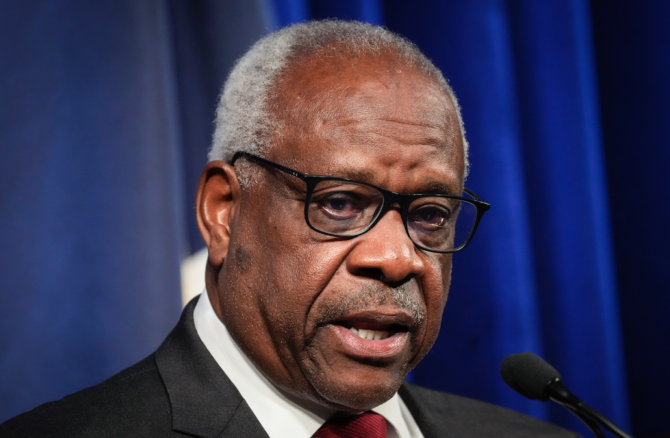 Between his involvement in turning back the clock on abortion rights by striking down Roe v. Wade, to his unsettling concurring opinion in the decision targeting the foundation of contraception and same-sex marriage rights, to that whole messy business with his insurrection-supporting wife, Ginny, the conservative justice has attracted some heavy criticism.

Now it seems he’s heard the verdict in the court of public opinion. On Wednesday, The Associated Press reported that Thomas is backing out of a teaching job at George Washington University, after a massive pushback from students.

Thomas, 74, has taught at the private school since 2011. He was supposed to lead the seminar with Judge Gregory Maggs of the U.S. Court of Appeals for the Armed Forces. Maggs once served as a Supreme Court clerk to Thomas.

Thomas was part of the conservative majority that in late June overturned the Roe v. Wade decision that guaranteed the constitutional right to abortion. In the following days, thousands of students signed a petition calling for the school to sever its relationship with Thomas. But university officials refused.

While Thomas’ invitation to teach remained in tact, the message was clearly delivered. They’re just not that into you.

Twitter is feeling no sympathy, and many wished he was walking off of his main gig, not the side hustle:

Clarence Thomas is retiring from the wrong job.

Clarence Thomas will not teach at George Washington University this fall, weeks after a student-led petition sought his removal.

Great. Now get him off the [email protected] bench.

If you're OK with stripping away people's rights I hope you're o.k being publicly shunned as well and yeah I'm talking to you Clarence Thomas

BREAKING: Clarence Thomas was recently forced to back out of a teaching gig at GW due to a student uproar.

Clarence Thomas just quit his teaching job at George Washington University after student protests and a petition with 11,000+ signatures

Clarence Thomas quit his teaching position, that he’s held since 2011, because he couldn’t handle students exercising their first amendment rights.

May he never know a moment of peace in public again.

Clarence Thomas taught a class at George Washington Law. After the abortion decision many students called for his removal. The school said it still supported Thomas. But now he's quit. Is Clarence scared to face the music?