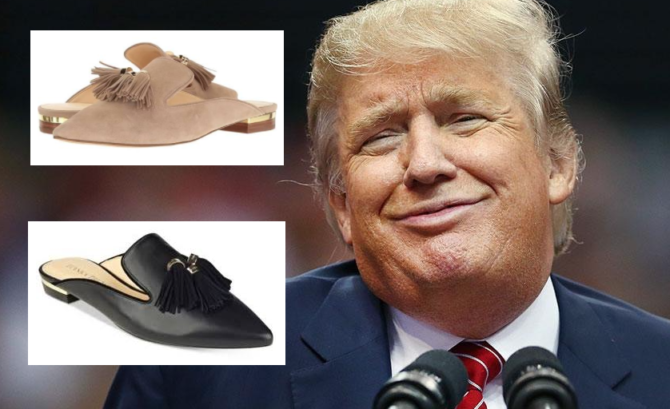 Donald Trump is so used to trashing anyone he doesn’t agree with on Twitter that the habit has rapidly become a serious issue since he was sworn in as our 45th president. Now he may have finally crossed a clear legal line, and because every bit of news out of his administration is required by physical law to be totally absurd, the harmed party is Nordstrom.

So just to sum up: While an unconstitutional travel ban works its way through the Judiciary and an anti-abortion-leaning Supreme Court nominee waits to learn his fate, President Trump may now be in hot legal water with Nordstrom, the same place you purchased a birthday present for your aunt.

Last week Nordstrom announced it was dropping Ivanka’s line, citing declining sales. You can just guess how that went over with Daddy.

The President tweeted the following message from his personal account (@RealDonaldTrump), then followed up with a retweet from his government account (@potus):

By “always pushing me to do the right thing,” could the President be referring to reports that Ivanka and her husband, Jared Kushner, had to talk him down from the ledge of signing a nasty antigay Executive Order last week?

It would seem all too likely, but that’s hardly the point.

Although the President has gone after companies on Twitter before, he now exposes a glaring conflict of interest (his daughter) in attacking Nordstrom via his official presidential Twitter account.

Kathleen Clark, a government ethics expert, explained to the L.A. Times why this is so, so very problematic:

“The implicit threat was that he will use whatever authority he has to retaliate against Nordstrom, or anyone who crosses his interest.”

If he was any other government employee, this would be illegal.”

Nordstrom has reiterated that it made the decision based on performance of the brand in its stores, but whether or not that’s true, the President is using his official capacity to lash out at a company because of its dealings with his family member.

When asked about it, White House spokesman Sean Spicer said that “[President Trump] has every right to stand up for his family and applaud their business activities, their success.”

“For someone to take out their concern with his policies on a family member of his is not acceptable,” he added.

The tweet sent Nordstrom’s stock seesawing throughout the day, though it regained its losses to finish out 4% higher than yesterday. Only time will tell if the President’s vendetta against the department store will last, or if it’s just his indignation du jour.

Norm Eisen, co-founder of Citizens for Responsibility and Ethics in Washington, is urging the company to sue under the California Unfair Competition law, and offering to personally help:

trump! he caused the harm. let me know if you want to do it together @JoshACLU https://t.co/AFCJbS4rqR

wow, hadn't thought of that angle. also, think trump is defending his emoluments,warning others not 2withdraw payments 2him &family–or else https://t.co/mLJELpheNB

This most recent ridiculousness comes the same week we learned that Melania Trump is suing a newspaper and claiming she lost a “once-in-a-lifetime” opportunity to cash in on being First Lady after it was falsely reported, and subsequently retracted, that she once worked as an escort.