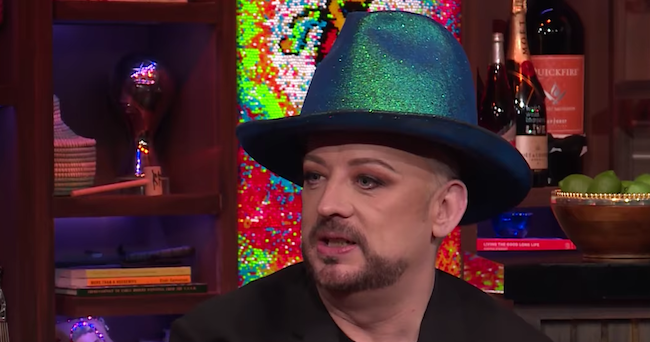 In the 1980s, Boy George and George Michael were riding high on their success — and occasionally colliding with one another.

This week, speaking with Andy Cohen on Watch What Happens Live, Boy George opened up about his occasionally fraught relationship with Michael.

Asked if they eventually put their differences behind him, Boy George replied, “Yes we did.”

“It wasn’t really a feud. In the ’80s, everyone — Pete Burns, me, we all used to be really bitchy about each other.”

“It’s like the thing that you did in the ’80s in those pop magazines. Now it’s the [Real] Housewives who do it! Nowadays it’s a bit more respectful but in the ’80s, you just said vile things about everyone.”

Boy George and George Michael were not exactly gabbing on the phone for hours a day. They’d be in touch “on and off” in later years, and Boy George really don’t know much about George Michael’s personal life.

I read stuff in the papers, obviously. But I never knew kind of really what… he was very kind of… kept people out, he was quite private, so I didn’t really know much about what was going on.”

After a post mortem test came back inconclusive, the cause of George Michael’s death last Christmas is still under investigation.

Watch the clip below: