A young boy has written a letter to Santa expressing concern that God might not love him for being gay.

The boy, named Will, addressed the letter to the North Pole. Each year, the USPS intercepts letters sent to Santa and publishes some of them online as part of its Operation Santa project. It’s a tradition dating back to 1912. This enables companies, organizations or individuals to sponsor letters and respond to them. 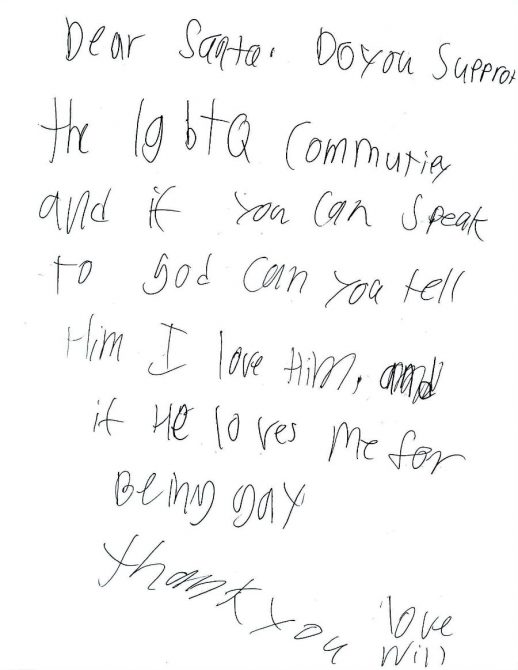 The boy writes: ‘Dear Santa, do you support the LGBTQ community and if you can speak to God, can you tell him I love him, and if he loves me for being gay[?]

Twitter user Nancy Cruz-Garcia spotted Will’s letter on the site and shared it to Twitter. It has had almost 200k likes since being posted on Sunday.

This letter to Santa broke my heart. pic.twitter.com/NWbum1rvaX

“This letter to Santa broke my heart,” said Cruz-Garcia, following it up with another tweet saying, “Ima cry reading all these letters. Kids are so precious. I can’t.”

Based on the writing, this kid is way too young to know if he’s gay or not. And I’m sure his parents have been pushing it on him.

Others were more supportive.

To the people saying his parents are obviously forcing the idea of being gay on him, it’s so obvious that he lives in a Christian household. As well as it’s obvious hes been thought that it’s wrong in gods eyes because hes asking if God still loves him. I swear y’all say ANYTHING pic.twitter.com/ai9sXcjQ8q

Some pointed out that young children are often asked if they have a crush on the opposite sex – so why is it so hard to understand that some may have same-sex feelings?

The venn diagram of people saying this kid is too young to know if their gay and the people who ask toddlers if they have a girlfriend yet is a circle.

Some sought to reassure Will and other young LGBTQ people that God loves them.

He does. This myth they God doesn’t love everyone needs to be abolished. Catholicism doesn’t speak for God, and the idea that they do has blinded millions. God loves each and every one of us because we are created from Him. God is love and those who live in love live in God.

Others have been expressing sympathy with many of the other letters shared by children. Some are coping with parents who have a serious illness or no money to pay bills, let alone for presents.

To read more of the letters, check the USPS Operation Santa website. December 4 is the day you can start adopting letters.

Related: People are fainting over this children’s book featuring a gay black Santa written by a Jewish man