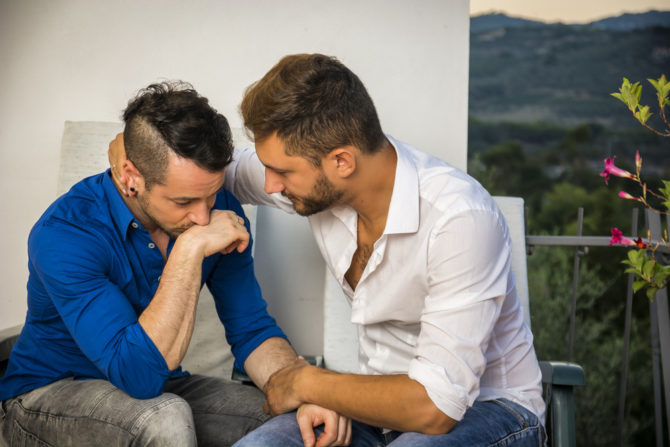 What do you do when your boyfriend of almost five years suddenly tells you he’s straight? That’s what one Reddit user wants to know.

“Yeah, umm. So a quick recap,” the man, who describes himself as gay and “40ish” begins. “We’ve been together 4 1/2 years. During that time he maintained a bisex stance. Fast forward a few disconnects and hurtful phrases later he came out as straight.”

He continues: “We’ve gone back and forth about this before. Like years ago when we first started dating. He kept coming back and apologizing after he brought it up. So now he is straight.”

Just to confuse things even more, the man says, his now-straight boyfriend “says I’m the only guy for him” and that he doesn’t want to break up, even though he’s not romantically interested in him.

“He wants to stay. He also has no other place to live. He does love me. I love him.”

Their sex life has always been “underwhelming,” and they’ve been to couple’s counseling with three different specialists, but, the man says, nothing has worked.

“We don’t know what to do,” he writes. “Our lives are heavily intertwined. I loathe dating and don’t want to start again. He likes the women for the sex but he doesn’t want to deal with the other issues he feels comes with dating women.”

“Four years isn’t the end of the world mate,” another person says. “It’s a chunk of time but it’s still pretty insignificant in the scheme of things. I dated my ex gf for 5 years from the age of 18, I’m 25 now and it feels like she was just a speck in my past.”

“All of this boils down to basics,” a third person writes. “You have spent fifty four months of your life with him, at the end of which he is stating that he isn’t gay or bi, he is straight. … F*ck him.”

“Kick him to the curb,” a fourth person says.

Then there’s this piece of actual sound advice: “In all honesty what I think this sounds like is that he loves the convenience you bring and not necessarily you as a whole person.

And also this: “You both sound… how to put this politely? Nuts.”

What do you think of this man’s predicament? And what advice would you offer? Sound off in the comments…