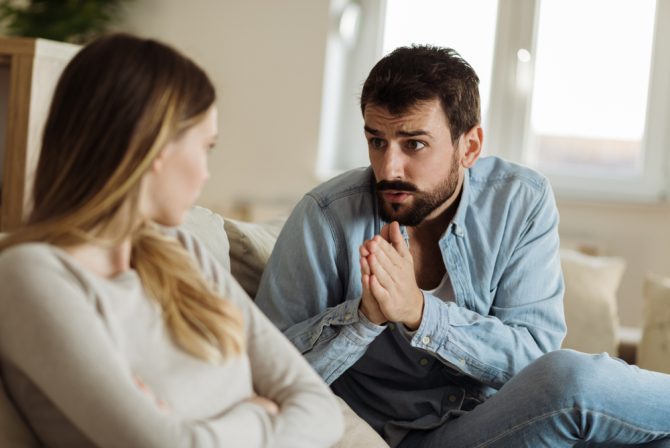 She says her boyfriend kept telling her it would be “good for me, would get my sex drive back and really turn him on too.” She eventually gave in to his requests in hopes that he would “drop the subject.”

“He found someone online,” she explains. “A really good-looking guy about my age, and he and my partner started getting it on. I thought I was going to be able to get away with just watching but half an hour in, my partner insisted I join in.”

“I pretended I wasn’t really there and it was OK,” she confesses.

“But since then he frequently texts random men, sending them pictures of us naked,” she continues. “I’ve even caught him taking pictures of himself erect and texting them.”

“When I confronted him about it, he said I want sex with other men really but won’t admit it. This is not true at all. I want to have normal sex with him. I thought we had a great partnership and would always be together but now it has all gone wrong. I can’t get him to understand that I don’t want sex with any other men.”

In her response, Deirdre tells the woman she needs to put her foot down and demand her boyfriend

“You should not take responsibility for his behavior,” she writes. “It is wrong of him to be sending pictures of you naked without your permission, so tell him he must stop or you may report it to the police.”

Clearly, Deidre says, the man is bisexual. There’s nothing wrong with that, of course, but the woman needs to have a serious discussion with him about it if they want their relationship to work.

What do you think of the situation? What advice would you give this woman? Sound off in the comments section below…