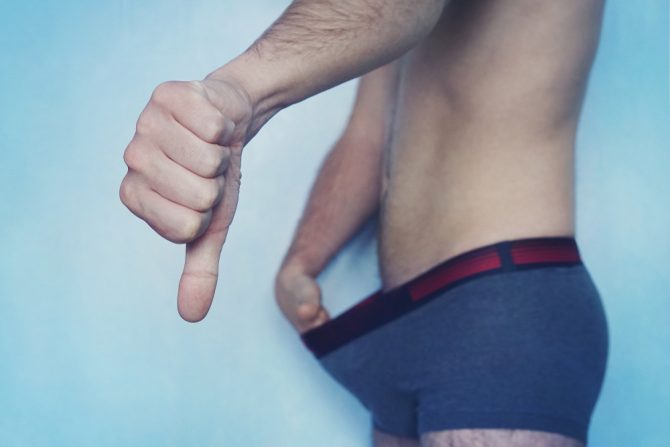 A woman says doesn’t know what to do about her boyfriend who won’t wash himself “down there” because he thinks touching his own genitalia makes him gay, so she’s seeking help from Reddit.

According to the woman, her 24-year-old boyfriend simply refuses to properly wash his nether regions.

“He explained that he doesn’t touch himself there, ever, because it’s gay,” she writes in the disturbing post.

“Therefore, he can’t clean the area specifically and just lets it get wet in the shower, that’s it. Other than this his hygiene is fine. I only became aware of the issue when we started getting more intimate.”

We don’t even want to imagine what it was like for her to make such a horrifying discovery.

“He says ‘any contact a guy has with the male ass or pubic areas is in a gay realm.’ I said that makes absolutely no sense when it’s your own body. It’s not GAY to tend to your OWN self, gay involves OTHER people!”

“Do your vag a favor and don’t sleep with him til he washes cause that is a bacterial infection waiting to happen,” another warns.

“Maybe take him to a Dr and have a hygiene intervention with him,” a third person suggests.

One person urges the woman to get out while she can: “I feel like the fact that he doesn’t wash or touch his own genital area (as genuinely disturbing as that is) is unfortunately only the tip of the iceberg with this whole thing.”

Another thinks her boyfriend is just being stubborn: “It’s beyond ridiculous, and into the realm of obviously lying. I think it’s far more likely he is he type that can either never lose an argument or never admit to lying and this simply spiraled out of even his control.”

And then there’s this person, who asks a very valid question: “How does he pee without touching his dick? I’m imagining a huge mess.”