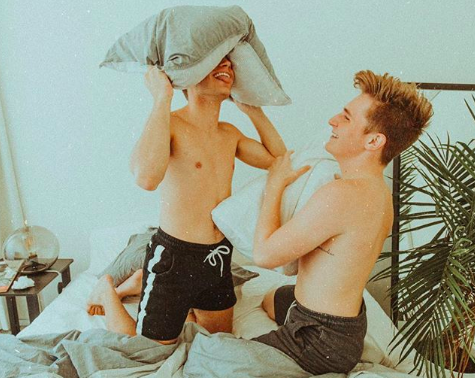 The bond of brotherhood is strong.

Twitter user heycnyn recently shared a picture of himself and his boyfriend snuggled up in bed together, writing: “hi lemme introduce you to my adventure buddy, best friend, lover, and everything else.”

hi lemme introduce you to my adventure buddy, best friend, lover, and everything else pic.twitter.com/EhfgFOTPvB

He followed that up with a second tweet, letting his nearly 20K followers know they had merged their Instagram accounts together and that he was “so excited to see where things go.”

it was all a blur of color ? – weird question but what’s something that makes you nostalgic? ?

paint me like one of your French girls ???? – omg we can post again that was the weirdest thing?! our account was having major issues but I think it’s all good now?! ?

lost in la la land ? – ok something I want to start working on is creating a loving supportive community ? SO say hi in the comments and reply to someone, let’s all be friends ?

But many people on Twitter couldn’t seem to get past the boys’ uncanny resemblances to one another.

Check out some of their responses…

Self love is important

Love it when brothers get along 🙂

Incest is a crime ya know…

But apparently heycnyn didn’t see the humor in any of it, because he later tweeted: “I’m honestly tired of being dragged for being in love. We’ve been through hell for being gay and now this FROM gays”.

well wait maybe add a few years to that, i’m honestly tired of being dragged for being in love. we’ve been through hell for being gay and now this FROM gays. pic.twitter.com/pnvu6wfUuK

What are your thoughts on boyfriend twins? Share your opinions in the comments section below…