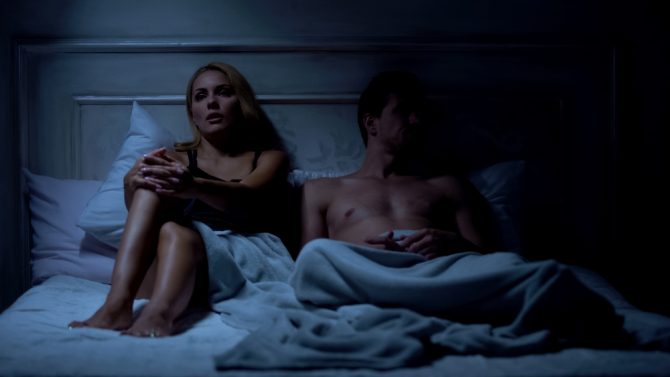 A U.K. woman says her boyfriend of one year seems to be losing interest in her so, naturally, he must be gay, right?

“I am 31, and have been dating my boyfriend, J, for a year,” she writes in a letter to advice columnist Annalisa Barbieri at the Guardian. “I am developing deep feelings for him, but have an inkling that he is a sexually repressed homosexual.”

The woman says she doesn’t want to fall in love, marry, and have kids with someone “only to find out that, although he may have loved me, we never truly shared a sexual attraction.”

“Despite his tender and affectionate nature, I have never felt him to be sexually attracted to me,” she laments. “I often initiate sex (and am often ignored).”

All her other boyfriends, she says, made “consistent unwanted advances” and she was constantly “fending off” their desires for sex. Her new boyfriend, on the other hand, only wants to have sex with the lights off and then immediately goes to sleep after.

“When I raised the idea that he might not be sexually attracted to me, he flipped out,” she writes. “He mentioned early on that he separates ‘sexual desire’ or ‘sex’ from ’emotional connection,’ which left me aghast: the feeling of being in love, for me, is deeply bound up with sexual and emotional intimacy.”

“I am very troubled and need to know if he wants me.”

In her response, Barbieri tells the woman that not feeling sexually desired in a relationship can be “demoralizing,” but maybe she needs to shift her perspective just a wee bit.

“I wonder where you learned that a man ‘wanting you’ was defined by ‘consistent and often unwanted’ advances rather than the ‘tender, affectionate and caring’ man you are with at the moment?” she says.

Barbieri consults sexual and relationship psychotherapist Murray Blacket for help with the matter, and it’s Blacket who says the issue could be any number of things, and assuming J is gay is a cop out for trying to find the real answer.

J may be less sexually experienced than you – or the men you are used to. He may be shy, lacking in confidence or experience; or you may have mismatched libidos, or ways of initiating sex. If in response, you are asking J: ‘Are you gay?’ or ‘Why don’t you fancy me?’ in response, that would feel like an attack for any man – but especially if he’s lacking in experience and already nervous.

Barbieri suggests the pair try couple’s counseling. Either that or find a better way of communicating since, obviously, something’s off.

“You both need to take responsibility for your part in it,” Barbieri writes. “Putting him on the defensive isn’t going to make him feel great. Remember: there are two of you in this relationship.”

What do you think about this situation and what advice might you give the woman? Sound off in the comments section below…