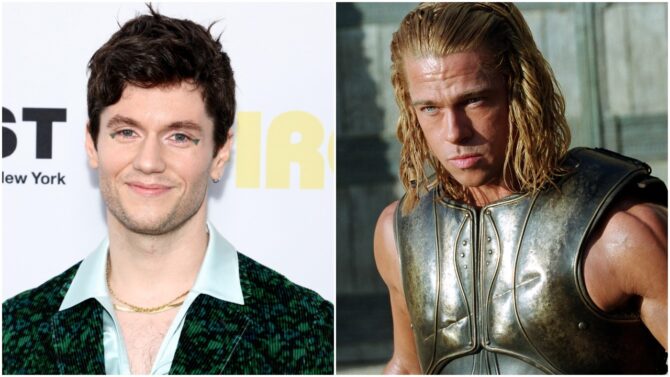 Is there anything in Hollywood more powerful than Brad Pitt’s buns?

They’ve already given us so much to be grateful for and now, it turns out, we can also thank them for helping dreamy Fire Island‘s James Scully realize he was gay.

As one of the many, many crush-worthy stars in the queer rom-com, Scully plays Charlie, a human Golden Retriever, and the object of Howie’s (Bowen Yang) affection, whose sweet demeanor and willingness to laugh at everything make him easy to fall for.

In a charming new interview with Thrillist, Scully reminds us that, in the not too distant past, movies like Fire Island were practically unheard of, with positive depictions of queer people in mainstream media few and far between.

“There wasn’t a lot of explicitly queer stuff,” he shares, “so I do feel like I was just grabbing little breadcrumbs from movies and shows when I could.”

Surely that’s a sentiment many of us born in the ’90s and earlier can relate to. And, speaking of relatability, Scully goes on to reveal that he found it pretty impossible to deny his queerness any longer after first seeing Brad Pitt’s behind in the 2004 historical epic, Troy.

Oh, honey, we’ve all been there.

“That was definitely a moment where I was like, ‘Yep. I am attracted to beautiful men, for sure. No more uncertainty about that,'” Scully jokes.

“I guess you could argue that the abundance of mostly nude, hot men in that film makes it a little queer. How am I supposed to not be gay when this movie exists? What is my response to this scene with his naked butt supposed to be besides ‘I want to sleep with Brad Pitt’?”

Just for posterity’s sake (Posterior’s sake? Is that a thing?), let’s revisit some footage of Pitt in Troy:

But we digress. Elsewhere in the interview, Scully details more of the pop culture that helped inspire his sexual awakening, everything from Sense And Sensibility to—hilariously—Frog And Toad.

Perhaps funniest of all is his shout-out to the musical Cats, which he considers a real “turning point” for him:

“I first saw it at my high school. The young man who played Rum Tum Tugger, Zachary Wilhelm, he’s from Texas, too. We still chat sometimes. I was like, ‘Uh-oh. Do I think this cat is sexy? What’s going on?’ That was definitely a moment for me. After experiencing it visually, I went home and obsessively listened to the soundtrack. The Macavity number, where all of the lady cats are singing together and dancing, I was like, ‘That’s my track.’ That’s who I wanted to be—a belting Broadway chorus girl—so badly when I was growing up. It didn’t pan out that way, but I’ve made peace with it. I’m closer than I thought I would be, that’s for sure.”

Oh, James Scully, you may not be a dancing cat chorus girl, but look at you now! You’re a swoon-worthy star of one of the summer’s hottest movies! And, to think, we have Brad Pitt’s perfectly sculpted butt to thank for that!