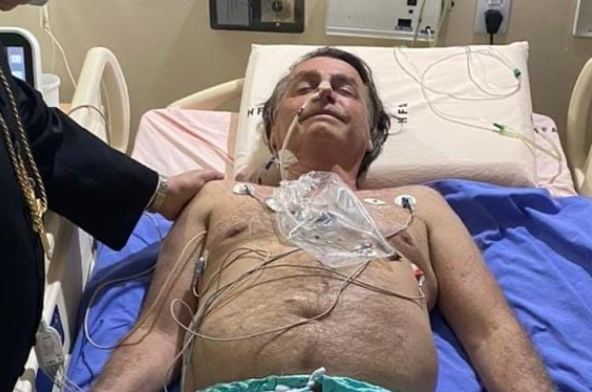 President Jair Bolsonaro of Brazil has been admitted to a São Paulo hospital after a bad (and we mean bad) case of the hiccups has remained steady for over ten days, reports Globo.

The ultra-conservative and self-described antigay leader was first taken to an army hospital in the capital city of Brasilia before being transferred to the civilian facility to be tested for an obstructed intestine.

If the hiccups don’t stop on their own he could be looking at emergency surgery soon.

Bolsonaro has faced widespread criticism for his mishandling of the Coronavirus pandemic, underplaying the threat to such a degree that makes Trump’s response seem almost measured. Almost. In the past, he’s urged Brazilians to forget about the virus and stop acting like a “country of f*gs.”

The president, who also boasts he is a “proud homophobe,” was photographed in his hospital bed, a priest touching his shoulder and praying.

Bolsonaro addressed the hiccup attack last week, telling listeners of a July 7 radio interview: “I apologize to everyone who is listening to me, because I’ve been hiccuping for five days now.”

On social media, he complained: “I have the hiccups 24 hours a day.”

He also blamed the hiccups and intestinal issues on an injury he sustained during a 2018 assassination attempt in which a woman stabbed him in the stomach.

“One more challenge, a consequence of the assassination attempt promoted by a former member of the [left-wing party] PSOL, the left arm of the PT, to prevent the victory of millions of Brazilians who wanted changes for Brazil,” he posted to social media.

He added: “A cruel attack not only against me, but against our democracy.”

The president’s approval has fallen sharply during his time in office, in large part due to his failure to secure Covid vaccine supply to ease the nation’s suffering.