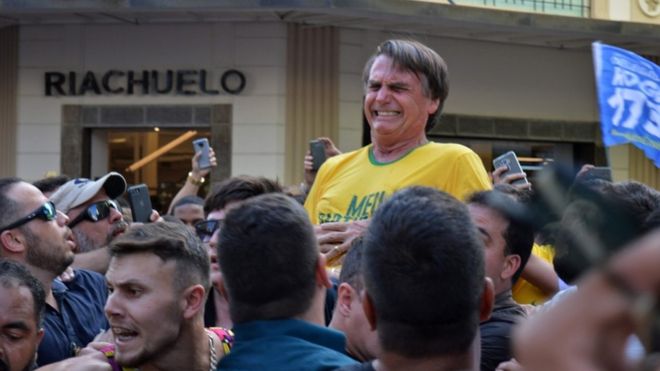 Jair Bolsonaro, the frontrunner in Brazil’s presidential election, was just stabbed at a campaign rally.

The controversial, far-right politician had a knife pierce through his intestines while standing in the center of a crowd in broad daylight. He was quickly whisked off to a nearby hospital, where he underwent a two-hour emergency surgery.

63-year-old Bolsonaro is a former army captain who is often referred to  as the “Brazilian Trump.” He’s pro-gun, anti-abortion, and extremely antigay with a history of making inflammatory remarks about gay people, women, and people of different races.

In addition to frequently equating homosexuality with paedophilia, he once said that he would be “incapable of loving a gay son” and that if, god forbid, he did have a gay son, he would hope to see him “die in an accident”.

Lucky for him, his son Flavio, who is also a politician, turned out 100% straight.

36-year-old Flavio also takes after his dad when it comes to homophobia. Not only does he support his father’s antigay policies, but he’s gone on record to say “normal is to be heterosexual” and “I doubt that any father is proud to have a gay son.”

Some of Jair Bolsonaro’s other offenses include saying Congresswoman Maria do Rosario was “not worth raping; she is very ugly” and using racist slurs against Afro-Brazilians.

After his father’s attack, Flavio tweeted: “Unfortunately it was more serious than we had expected. He lost a lot of blood, arrived at the hospital with a [blood] pressure of 10/3, almost dead. His condition now seems stabilized. Pray, please!”

A few hours later, he posted an update on his father’s condition, along with a picture of him smiling in his hospital bed: “Jair Bolsonaro is stronger than ever and ready to be elected president of Brazil in the first round! God has just given us one more sign that good will overcome evil! Thank you to all who have given us strength in this very difficult time! Brazil above all, God above all!”

Bolsonaro is currently recovering in intensive care, where he is expected to spend at least a week. The man suspected of stabbing him, Adelio Bispo de Oliveira, was arrested after being beaten by a group of Bolsonaro’s supporters.

After the attack, Human Rights Watch, which has been an outspoken voice against Bolsonaro and his views, condemned the attack.

“Political or ideological differences should only be resolved through democratic processes, and never through violence,” the watchdog group said in a statement. “The Brazilian authorities should carry out a prompt, impartial and thorough investigation into this crime, and ensure that justice is served.”

Indeed! Violence is never the answer.