In what could be a crippling blow to his right-wing social media domination, Twitter has banned President Donald Trump from the platform for life, less than 11 days before he is scheduled to leave office. The move also comes two days after the president incited an angry mob to break into the U.S. Capitol while Congress was in the process of certifying Joe Biden‘s victory, a terroristic rampage that left five dead and the nation stunned at a traitorous element in its midst.

“After close review of recent Tweets from the @realDonaldTrump account and the context around them we have permanently suspended the account due to the risk of further incitement of violence,” Twitter said in a statement via tweet. “In the context of horrific events this week, we made it clear on Wednesday that additional violations of the Twitter Rules would potentially result in this very course of action. Our public interest framework exists to enable the public to hear from elected officials and world leaders directly. It is built on a principle that the people have a right to hold power to account in the open. However, we made it clear going back years that these accounts are not above our rules and cannot use Twitter to incite violence. We will continue to be transparent around our policies and their enforcement.”

Twitter had already banned Trump for a 12-hour period for “repeated and severe violations of our Civic Integrity policy,” both for inciting violence and repeating false claims that the 2020 election was rigged. The life ban could hurt his attempts to stay politically relevant after he leaves the White House although he is quickly gravitating his social media presence to right-wing platforms such as Parler, where users can post defamatory propaganda unfettered by fact-checking or monitoring. (UPDATE, Apple has threatened to ban Parler from its app story unless it bans violent threats from its platform.)

Twitter further elaborated on the permanent ban in a blog post, citing two new tweets from Trump that also violated the website’s policies.

After close review of recent Tweets from the @realDonaldTrump account and the context around them we have permanently suspended the account due to the risk of further incitement of violence.https://t.co/CBpE1I6j8Y

“Due to the ongoing tensions in the United States, and an uptick in the global conversation in regards to the people who violently stormed the Capitol on January 6, 2021, these two Tweets must be read in the context of broader events in the country and the ways in which the President’s statements can be mobilized by different audiences, including to incite violence, as well as in the context of the pattern of behavior from this account in recent weeks,” Twitter stated.

Twitter CEO Jack Dorsey’s decision came not long after GLAAD and other LGBTQ equality groups called on Twitter and Facebook to make their bans permanent based on the Trump administration’s history of animus to gay people and because “the risk of allowing Trump to continue this behavior using these platforms is too great.”

Few will forget that in 2017, Trump attempted to ban transgender servicemembers via Tweet over the objections of his own military advisors. 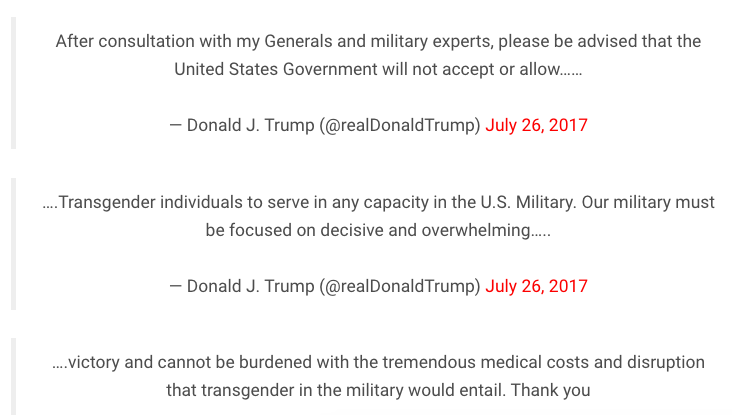 Facebook has placed Trump on indefinite suspension citing the violence earlier this week. No word yet from Facebook CEO Mark Zuckerberg, a notorious Trump enabler, on whether the company will follow suit and take Trump’s ban from “indefinite” to lifelong.