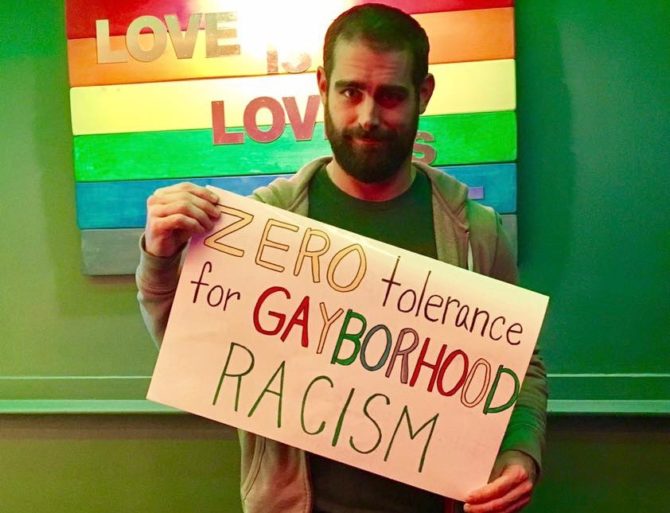 We love us some Brian Sims. Whether he’s fighting to ban gay conversion therapy in his home state, or posting adorable #TBT photos of himself in his college football uniform on social media, he can do no wrong in our book.

In a bold new op-ed published his local paper the Metro, Sims tackles an issue that still makes a lot of people uncomfortable: Racism within the LGBTQ community.

“There is racism in the Gayborhood,” he writes. “I know this because black and brown people who live in, shop in, work in, and otherwise come to the Gayborhood like I do, have been saying so for years.”

Right off the bat, Sims explains that racism is more than just treating black and brown people in an outwardly hostile manner.

This seems to be a sticking point for many deniers, the idea that because racism includes acute acts of physical or psychological aggression towards black and brown people, it can’t include, or no longer includes, chronic or latent aggression towards them as well.

Latent aggression like, say, writing “No blacks” or “No Asians” on one’s dating profile, or expecting black and brown LGBTQ people to dress and talk and behave like “everybody else” (a.k.a. white people), whether it’s out in public, at a bar on Saturday night, or inside their places of employment.

Sims says LGBTQ people of color are often expected to “assimilate their language or cultural expression” in order to better fit in. When it comes to work, specifically, they are often both paid and promoted less than their white counterparts and used by business owners and organizations to promote a false image of inclusivity.

“Black and brown LGBTQ people are all too often recruited to be the face of service organizations or businesses because doing so helps promote their image, while simultaneously relegating them to front-line or service positions,” he writes.

And he’s not just talking in general. It’s happening inside our very own “Gayborhoods.”

Businesses and organizations that serve the LGBTQ communities aren’t absolved from responsibility for discrimination because of who they serve. In fact, many deserve to be held to the higher standards that they themselves have promoted. … Despite our collective opposition to the hateful policies and rhetoric, there is still racism in the Gayborhood and it is incumbent upon us to stop it

So what’s the solution?

Well, Sims says, we can start by simply opening our eyes to the problem. Then we can look for ways to come together and fix it.

“At a time when being an ‘ally’ and recognizing one’s ‘privilege’ are quickly becoming just liberal buzzwords, there has never been a more important time to act substantively as an ally in support of black and brown people in the Gayborhood, and everywhere else.”

He concludes, “From promoting collaboration and lifting voices of equality to admonishing discrimination, I owe it to the people who elected me, and to the communities I can most impact, to be louder and set the best example of a genuine ally as I can.”