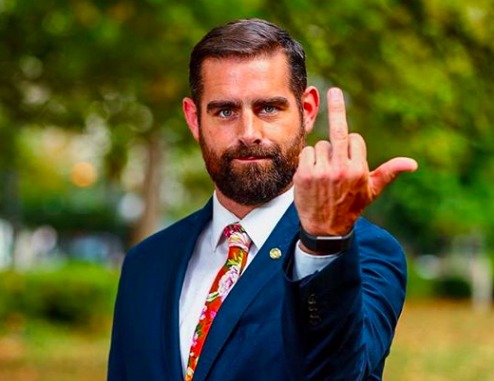 Pence was in the City of Brotherly Love to attend a fundraiser for Scott Wagner, the Republican nominee for governor in Pennsylvania.

Related: Rep. Brian Sims totally out-trolled an antigay troll and the Internet is living for it

In a now-viral “official welcome” posted to social media, Sims detailed all the things that make Philly a tolerant and diverse city–and why Pence really doesn’t belong there:

To be clear, we’re a city of soaring diversity. We believe in the power of all people to live and to contribute: black, brown, queer, trans, atheist, immigrant, we want you and we’ll respect you.

So keep that in mind while you’re here raising money to attack more families, spread more lies, blaspheme with your bible, and maybe even talk to a woman without your wife in the room. We have plenty of [diverse people], and they’re pretty much all more powerful and more real than you have ever been.

So…get bent, then get out!

OFFICIAL WELCOME: @MikePenceVP let me be the first to officially welcome you to the City of Brotherly Love and to my District! We’re a City of soaring diversity. We believe in the power of all people: Black, Brown, Queer, Trans, Atheist, & Immigrant. So…get bent, then get out! pic.twitter.com/G9eLrXgeVn

But the savagery doesn’t stop there.

Sims’ message to Pence has received a ton of support; it’s also drawn a lot of criticism… which Sims gives absolutely zero f*cks about:

Bigotry isn’t funny or cute, @RepStevenSmith. Making light of it in such a flippant and callous way is gross. Shame on you. https://t.co/DQrt7Ji5z9

And the saddest, weakest response goes to…this fella! If only I were a real Princess, I’d spend enough money on education that silly weak men wouldn’t exist anymore and you’d never hear this kind of broken misogyny again. If only… https://t.co/lpqONtiZy2

Don’t be so obtuse, it’s reeks of inauthenticity. I don’t except respect. I expect equality under the law no matter what faith someone heading our secular government pretends to adhere to. https://t.co/cOU0gTRa4H

Imagine how embarrassed you’re gonna be when you learn that you live in Ohio and I’m not your State Rep.! ????? https://t.co/smowoQZMm2

Related: Brian Sims on becoming a gay sex symbol, bears and why Oprah should not run