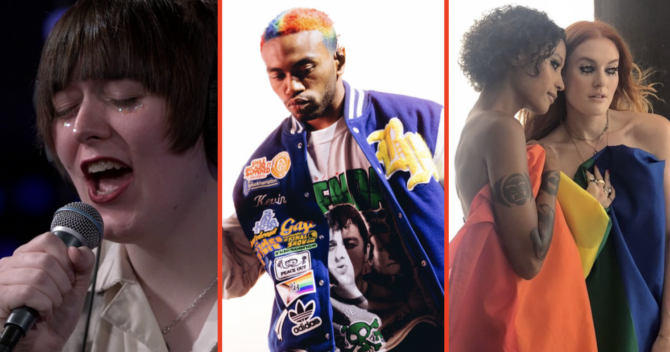 It’s been a bit of a tense week. Homophobes are sending Pride decor up in flames, storming drag queen storytime events, and planning to take over queer events by the Uhaul-full. That’s why, for this week’s bop round-up, we’re going to cool things down a bit. From the pristine pulse of FKA twigs’ sound to Left at London’s Ocean-esque vibes, here is a special chilled out bop round-up…

R&B sister duo Chloe x Halle have both been in their adult era for a couple years now (namely on their last album Ungodly Hour), but Chlöe’s solo work is ramping it up to an eleven. Following her TikTok-viral “booty so big” track “Have Mercy”, Chlöe is letting it all chill out on “Surprise”. The video is slow and sensual enough as is, but with lyrics boasting “tonight you get my freaky side,” this Parkwood protégé is ready to give it all. Musically, we mean.

“Make You Proud” by Left at London feat TYGKO

Left at London fans have been waiting for Transgender Street Legend, Vol. 3 since, well, Transgender Street Legend, Vol. 2. “Make You Proud” is the definition of a vibe, and a highly palatable track one could use to introduce someone to her music. It maintains her propensity for production quirks — the almost-theremin synth throughout the chorus is absolute ear-candy — but with a straightforward enough composition to be accessible to the new and longtime fans alike.

The much-anticipated song from twigs’ Tiny Desk Concert has finally hit, and it’s a beautifully vulnerable track stating “it’s dangerous to be a woman in love.” Twigs has been a favorite of the young indie-pop gays for years alongside acts like Florence and Marina, and this track fits right in with her stark, clear-through musical style.

Picking up the tone a bit, this Kool & The Gang cover is a swingin’ good time. If we ignore the fact that this is off the upcoming Minions soundtrack – an unreasonably stacked project with folks like Diana Ross, Phoebe Bridgers, and St. Vincent on it – it’s a perfect “mind off, groove on” track. Brockhampton seems to be headed towards a full-blown breakup (which will hopefully lead to more solo music from gay frontman Kevin Abstract), but if this is one of the last pieces we get from the band, what a fun way to go out.

Okay, we couldn’t leave the weekly round-up without at least one honest-to-goodness high energy dance moment, and who better than our girls Icona Pop and dancefloor classic Ultra Naté?

The track is an homage to Ultra Naté’s 1997 dance hit “Free” following its 25th anniversary. Icona Pop have shared that they actually used to play the song as DJs back in Stockholm before even forming their group. They went on to say of the track, “It is the ultimate expression of what we want Icona Pop to represent; freedom to be whoever you want to be, live life to the fullest, and have fun.”

See you back here next week for another bop round-up!