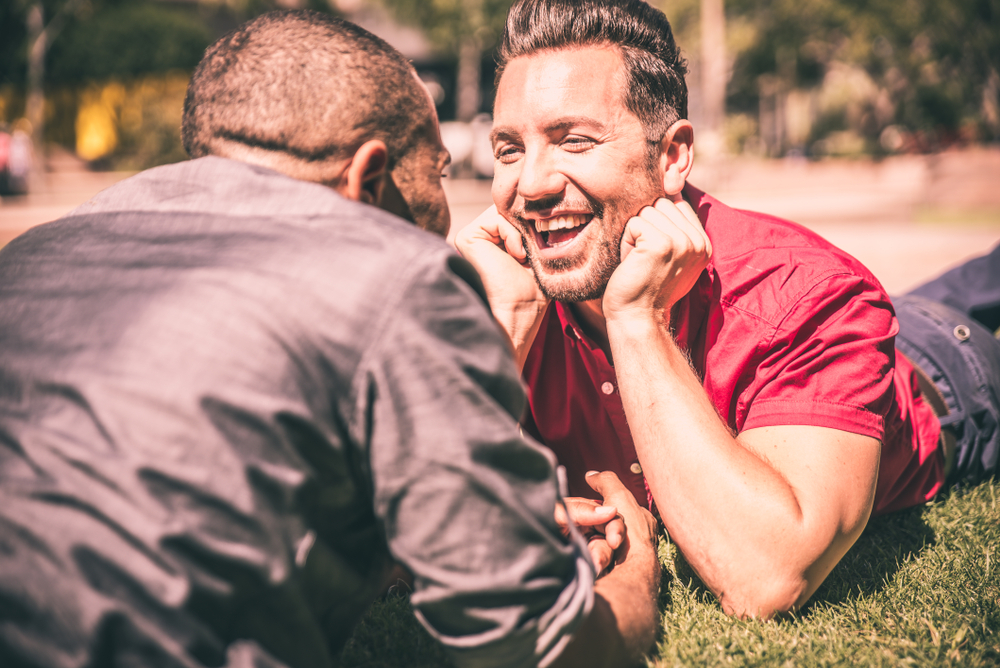 Hmm… I never considered gay men and exes-as-friends until Grace did on a recent episode of Will & Grace. She offered her observation while watching Will cook for his ex-turned-breakfast guest Vince, who announced his wedding to his boyfriend of nine months in between bites.

“Obviously, you’re invited, but you don’t have to come,” he said. Obviously, Will went–with Grace, Karen, and Jack as his plus one, two, and three.

I’m with Grace on this one. I’m a gay guy, but I’ve never been a “Let’s be friends” kind of ex. I’m connected to exactly one of mine on Facebook, and in the past few years, I’ve ignored requests from at least three others.

Exes as friends just isn’t my thing. But judging from how many gay men I know who maintain cordial-to-close relationships with past loves, I’m not the norm.

Most of my female friends, though, are with Grace, too. By the end of the episode, I’d come up with five possible reasons why.

1. Men and women tend to fall in and out of love differently.

F**k buddies and NSA come easier to men because they’re better at compartmentalizing physical and emotional connections. Women are less likely to separate church and state and more likely to nurture boundaries and structure in straight relationships, which is no doubt why more of them aren’t open.

Passion of mind, body, and soul is a hard habit to break. The harder women fall in love, the harder they may fall out of it, leading to potentially bitter and acrimonious aftermaths – especially if the guy instigated the split by indulging in f**k buddies and NSA sex.

2. So many women love their “closure.”

I’ve never been a “closure” person myself, but I can be such a drama queen at the end of a romance. I’ll delete emails, photos, and phone numbers–pretty much everything short of putting it in a hate song, Taylor Swift-style–in an attempt to expel an ex from my life.

“Closure,” though, appears to be more a female requirement than a male one. I wouldn’t be surprised if a woman scorned invented it as a move-on mechanism while listening to Gloria Gaynor singing “I Will Survive” on repeat. Once it comes–if it comes–“closure” can be as final as one of those Taylor Swift kiss-offs (unless kids are involved, of course).

In other words: I should have changed that stupid lock, I should have made you leave your key because we are never ever getting back together.

3. Platonic friendship between straight men and women is trickier than bromance.

That’s not to say straight men and women can’t pull off platonic. I’ve seen it happen, even with straight exes. But when it does, things are likely to shift once one or both get involved with other people.

Getting back to Will & Grace for a moment, Vince’s fellow groom seemed genuinely unruffled by Will’s presence at the wedding. He had “like three exes” of his own there, as Vince pointed out.

The last time Grace agreed to watch an ex say “I do” to someone else, in the 2002 episode “Dyeing Is Easy, Comedy Is Hard,” the results were considerably more disastrous for the unhappy bride. (I once went with a boyfriend to the wedding of his ex-girlfriend, who probably invited us only because her ex turned out to be gay.)

I’ve never known a real-life bride who would have made it possible for the groom’s ex to upstage her at her own wedding. Why risk him saying the wrong name, like Ross on Friends? That never turns out well.

4. Gay communities are fairly incestuous, so the paths of exes probably will cross again… and again.

Straight people enjoy such a mass meet market that it’s easier for them to pretend their exes don’t exist after a break-up, especially in big cities. They may very likely never see them again, unless they’re swiping left on Tinder.

Gay scenes are considerably smaller, so it’s highly possible that exes will run into each other the weekend after they split – or at the gym the next day. It’s harder to pretend someone has dropped off the face of the earth when you keep running into him.

By the time many gay couples reach a certain point of longevity, they become more BFFs than passionate lovers–at least that’s what longtime companions are always telling me. This happens with straight couples, too, but they’re more likely to cling to the traditional monogamy model.

I have a harder time with open relationships than I do with exes as friends, but I can see the benefit of them. In the absence of sexual jealousy, couples in open relationships can more easily forge friendships that are as unconditional as platonic ones.

They’re less dependent on the condition that both parties remain faithful or even that they stay together. So if they do eventually decide to split, there’s no need to ask, “Can we be friends?”