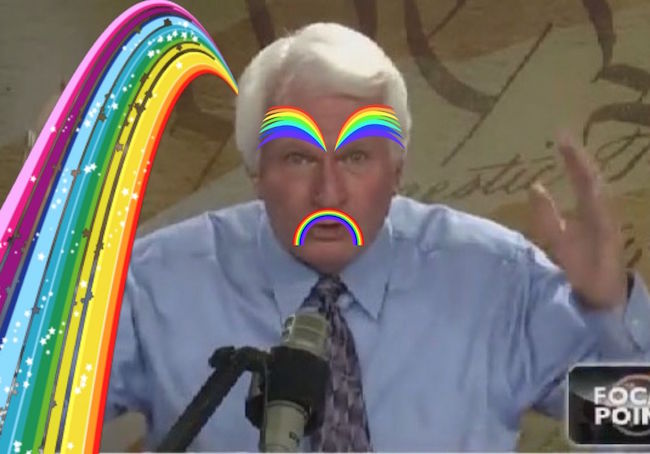 Is this Bryan Fischer’s most gloriously inane tweet yet?

One day after April Fools, the blighted host of Focal Point Radio has implied that the LGBTQ community “stole the rainbow from God,” which is the “worst example of cultural appropriate ever.”

Worst example of cultural appropriation ever: LGBTs stole the rainbow from God. It's his. He invented it. Gen. 9:11-17. Give it back.

Fischer, who calls gay activists “insatiable leeches,” has made a career out of comparing the LGBTQ community to Nazis. (A ludicrous notion debunked in no uncertain terms here).

Clearly more obsessed with gay sex than the average gay person, he’s terrified that the military has become overrun by “hypermasculine aggressive homosexuals” and has more rainbows on the brain than your average, dyed-in-wool Judy Garland fanatic, often blathering on about “gay rainbow nazis.”

@BryanJFischer oh no, the loathsome gays, they're hoarding all the light refracted through water vapor in the entire world!!!

bryan fischer, crying: please give it back
me, spinning on his ceiling fan holding a rainbow trapped inside a cube: never, straighty https://t.co/bMmKYiMWWq

We imagine there will be more reactions once everyone stops laughing.