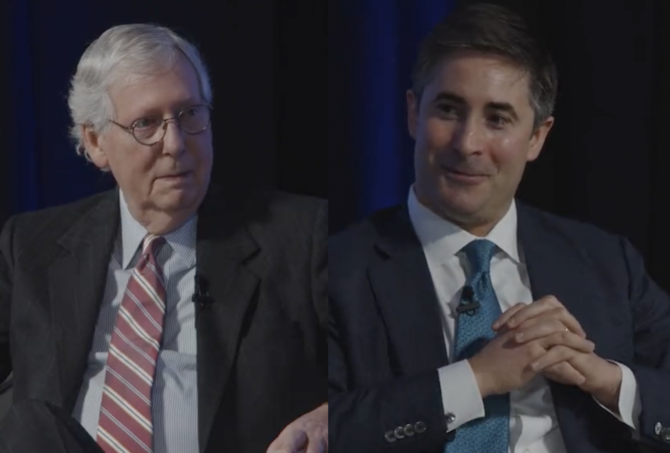 Things started out friendly-ish with Swan asking McConnell, who has served in the Senate since 1985, about his “ruthless style of politics.”

“I didn’t realize I was known for playing ruthless,” he joked. “My wife thinks I’m a really nice guy. My kids like me. I got a lot of friends. I’m shocked to hear such a comment.”

McConnell’s wife, Elaine Chao, served as Donald Trump‘s transportation secretary from 2017 to 2021. In March 2021, the Department of Transportation’s inspector general released a report that alleged she committed four kinds of ethics violations during her tenure, including using her staff and her position of power to call in personal favors.

McConnell’s remarks initially drew chuckles from the audience, but the interview took a far less jovial turn moments later when Swan teased him about how he could only list four people who actually liked him and then questioned his “moral red lines.”

Swan then pressed McConnell on how he could go from publicly condemning Donald Trump for his role in the January 6 insurrection on the U.S. Capitol to, two weeks later, saying he would support him if he ran for president again.

“How do you go from saying that, to two weeks later, saying you’d absolutely support Donald Trump if he’s the Republican leader in 2024?” Swan asked.

And that’s when things got really tense.

McConnell, no longer in a joking mood, replied with a canned response about having an “obligation” to his party no matter who they nominate. When Swan pushed back on this by asking if there was “any threshold” that would cause him to draw the line, McConnell grew even more cantankerous and tried to shut down the conversation by saying, “I say many things I’m sure people don’t understand.”

Now, check out how people are responding to the whole exchange…

A reminder that Mitch blamed Trump for inciting a riot that led to multiple deaths & almost got members of Congress killed. And then said he’d be ok putting Trump back in office.

Forget country over party, Mitch can’t even be bothered to put his own personal safety over party.

It’s party over country for this guy every damn day.

I have rarely called anyone evil. But no other adjective seems to suit him.

This is literally how every reporter should handle interviews. Every single time. Be fair but push back. Ask the question again, dig deep.

Kudos as always to @jonathanvswan!

He is as immoral as they come

There seems to be a disconnect in the general statement, “I am the leader of my party so I have to back my party.” At what point does the “leader” part start to express itself?

it’s refreshing to see a member of the press asking tough questions,it needs to happen more