Tom Daley was a diving prodigy. The four-time Olympic medalist was the youngest person to win a medal at the European Championships and qualified for the Beijing 2008 Olympics later that year.

But as Daley’s athletic career was taking off at 14 years old, he was also being tormented at school. Bullies taunted him with barbs such as “Diver Boy” and “Speedo Boy” and often tackled him to the ground. They knew Daley’s legs were valuable and threatened to break them.

Like many LGBTQ kids, Daley found solace in an activity away from his daily hell: diving.

“I think for a lot of queer people growing up, you always feel like you have to overachieve and do something to distract from the fact that you know that you’re different,” Daley told Queerty. “I love diving, and it was my way of just being able to put all of my —you know, not frustration — but in a way, yeah, my frustration and my worries and anxieties into diving.”

In his new memoir, Coming Up for Air, Daley delves into the undersides of fame and athletic greatness. He writes openly about his mental health issues, body image, and British Swimming’s austere culture and seeming disregard for the well-being of their athletes. Each chapter is titled after skills — “Courage,” “Perseverance,” “Resilience” — that Daley has learned in his journey to living a purposeful and well-rounded life.

Related: Tom Daley on the reasons he and Dustin Lance Black opted for surrogacy 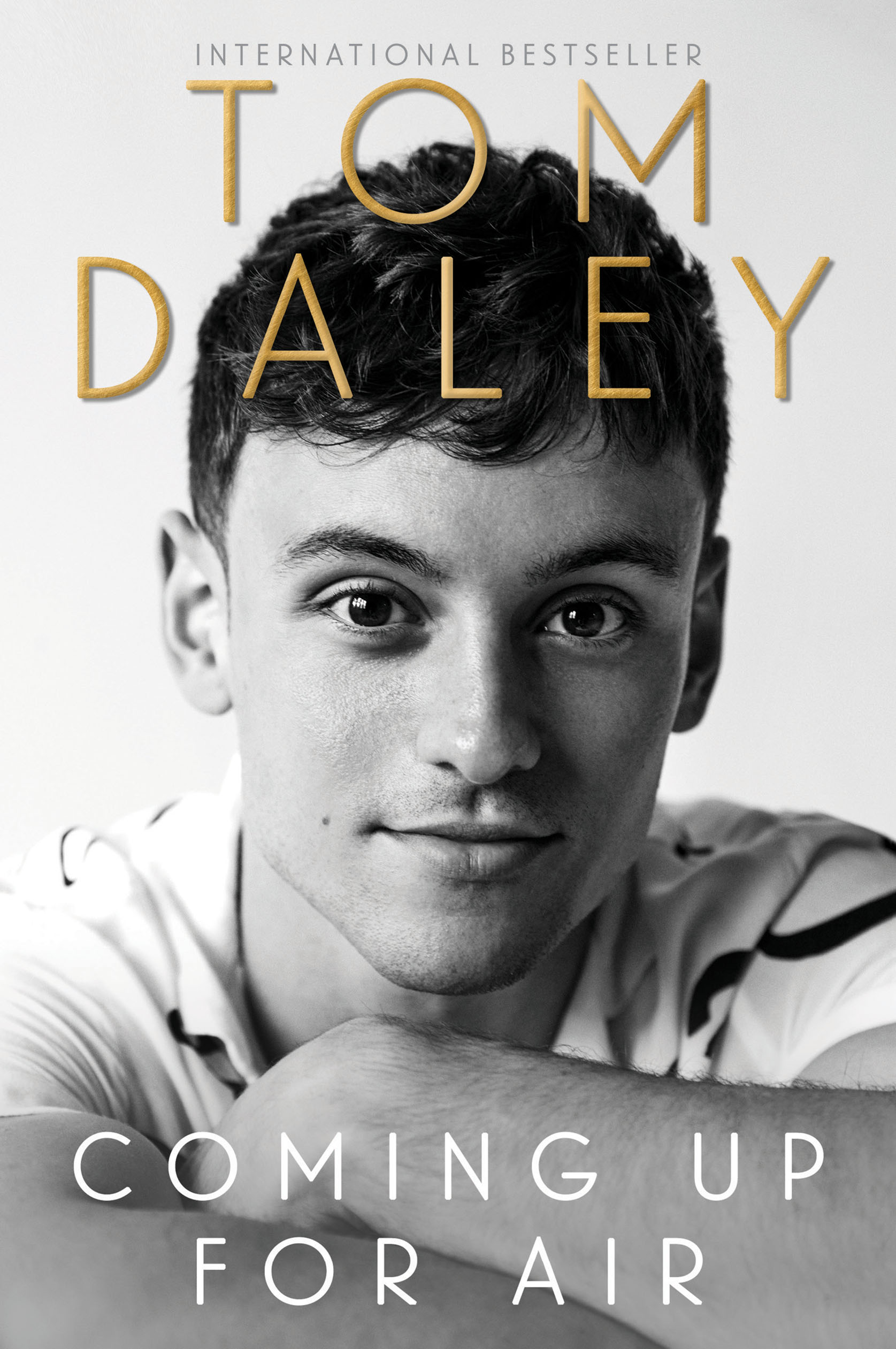 Now 28 years old, Daley says he views himself as a complete person. It took a lot of work and determination to get there.

“It is so easy to be trapped,” he writes. “A sexual identity; a job; a status; I could see that I could be more than that. I could do better and be better.”

Daley doesn’t gloss over the challenging aspects of his story, beginning with his complicated relationship with diving. Without the benefit of social distractions, Daley’s existence started to revolve almost exclusively around the sport. And the impact on this mental health was debilitating.

At 11 years old, Daley dealt with crippling anxiety about diving off a 10-meter diving board, despite doing it countless times before. Leading up to the 2012 London Olympics, Daley suffered PTSD over the episode and couldn’t perform one of his signature twists.

The memoir begins with an unfiltered look into Daley’s spiraling mind.

“The littlest things would throw me into a panic,” he writes. “Running late would fill me with anxiety. I became superstitious about walking over drains or under ladders. I had to set my alarm for a certain time; I needed to eat exactly the right thing for breakfast; I would leave at precisely the right time; I couldn’t walk over three drains or cracks in the pavements; my music needed to be at a certain volume.”

It’s powerful for somebody like Daley to publicize their battles with mental health, especially given the mental health crisis facing LGBTQ teens. The Trevor Project’s 2022 National Survey on LGBTQ Youth Mental Health reveals that one in four LGBTQ teenagers attempted suicide in the first half of 2021, and nearly half had considered it.

Daley is telling those kids he understands their anguish.

“I think it’s important to talk about the struggles,” he said. “Mental health is something that’s not really talked about very often, especially within men.”

“I think it’s important to talk about the struggles. Mental health is something that’s not really talked about very often, especially within men.” — Tom Daley

The breaking point came when a journalist twisted his words. In response to a question about why so many gay men adore him, Daley said it didn’t bother him what people thought, and he understood why he has a lot of gay fans. After all, he spends most of his time in skimpy trunks.

The headline to The Mirror article read, ‘Tom Daley: I am NOT gay—but I don’t care if you think I am.’

At that point, Daley decided it was time to come out publicly and posted a video on YouTube, which has since been viewed more than 13 million times. Initially, his press team was against it, but Daley knew he could no longer carry the secret.

It’s a story to which many LGBTQ people can relate, including athletes like 17-year-old British soccer player Jake Daniels, who recently came out. “Off the pitch I’ve been hiding the real me and who I really am,” Daniels said in a statement on Blackpool FC’s website. “I’ve known my whole life that I’m gay, and I now feel that I’m ready to come out and be myself.”

Visibility beyond the diving board

When Daley came out, it finally allowed him to see a life for himself outside of the pool. “For me, being able to talk to someone and have someone to feel really safe around — and that person for me has been Lance, my husband,” he said. “So being able to have someone to talk to, as you know, saved me in many ways because I’ve been able to feel safe and connected and feel like I can, you know, offload any of my worries and concerns.”

Throughout the book, Daley constantly mentions how spending time with Black — and now their soon-to-be five-year-old son, Robbie — is his ultimate respite. Their bond has helped Daley through many difficult chapters, including an identity crisis he underwent at 18 years old.

“There was a freedom that came with coming out to the world, moving to London and living in a way that I wanted, and that suited Lance and me,” Daley writes. “It was liberating.”

As Daley steps away from competing, it’s apparent his gay identity will be central to anything he pursues. On the podium after winning Olympic gold for the first time last summer, he said he was “incredibly proud” to be a “gay man and also an Olympic champion.”

His pronouncement was made in front of the world, including China, which hosted the 2022 Winter Olympics amid a crackdown on LGBTQ rights. Last fall, Daley took his advocacy even further, calling for an Olympic ban on countries that criminalize homosexuality during his acceptance speech at the 2021 Attitude Awards in London.

Some of Daley’s strongest language in the book is reserved for British Swimming, which he feels doesn’t treat its athletes with respect. “As an athlete, it can sometimes feel like you are ‘owned’ by your sport’s governing body and they can treat you as they wish,” he writes. “I feel like I have done so much for the sport, but my family and I, by default, are not offered the same level of support as others.”

“I’m a parent, I’m a husband, and there’s more to life than just being successful at diving. It took me a long time to get that sense of perspective.” — Tom Daley

Daley called attention to one particular example of mistreatment when British Swimming refused to let him room with Black on their way back from a competition in Shanghai. The plane made an emergency landing in Russia, and they were forced to stay in separate rooms. “I couldn’t help but think that things would be different if it was a heterosexual relationship and he was my wife,” Daley writes.

He wants athletes of all stripes to be treated equally.

“[Athletic bodies] need to be able to create a safe space and a safe environment for LGBT people to exist and feel like they’re part of the process like everyone else, and they’re not treated in a way that makes them feel less than or not as valid as our straight counterparts,” Daley said. “And I think that’s something that needs to be worked out. And you know, they say culture change from the top down.”

While Daley remains rightfully distrustful of some tabloid media, he’s come to appreciate the spotlight under which he and Black live, enabling them to serve as tangible role models for LGBTQ youth.

“We’re happy together. We’re living our life,” he said. “It just gives you some kind of hope, and I think there’s something really special about that. “I know that if I was younger and I saw that, I would feel like I had a chance at love at some point in my life.”

Providing that representation is just as powerful as Daley’s accomplishments in the pool.

“When you come out, you no longer have that pressure and that burden, that worry, and that stress with you. It’s like the shackles coming off,” he said. “When I realized diving [doesn’t] define me, it’s also like being kind to myself — allowing myself to make mistakes, not beating myself up about it anymore. And just realizing that I’m a parent, I’m a husband, and there’s more to life than just being successful at diving. It took me a long time to get that sense of perspective.”