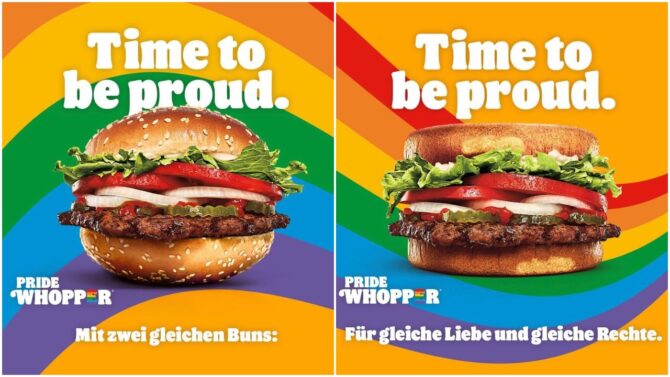 Oh, Burger King. You’ve long been one of the queer community’s biggest supporters in the fast food world—a proper Burger Queen! And we appreciate that. But we do have to talk about how your Austrian franchise is celebrating the season.

To kick off Pride Month, the brand—@burgerkingaustria—took to Instagram to share photos of their special, seasonal Pride Whoppers. With a retro rainbow background and the words, “Time to be proud” writ large, things are off to a good start! But then we took a closer look at the burgers in question, particularly the buns…

If you’ll notice, that Whopper on the left has two rounded, sesame seed-flecked pieces of bread; in other words, two top buns. But the right Whopper is a little less showy, its bread more flat, more squared off: Two bottom buns. Hmmm.

Perhaps Twitter user @JarrettSays—who first brought this to our attention—can clear things up a bit:

Burger King Austria made a Pride burger that’s either two tops or two bottoms… what in straight hell? pic.twitter.com/bSl3Cyiq9p

That’s right, Austrian Burger Kings are celebrating Pride Month with Whoppers featuring two tops and two bottoms! And while some would say that’s a recipe for disaster, we have faith that these proud burgers can work it out.

Joking aside, the chain clearly had good intentions here. If you take a look at their corresponding caption, it reads (in German): “With two equal buns for equal love and equal rights. We set an example for the equality of all identities and sexual orientations. A little twist meant to put a smile on our faces and remind us to treat each other with respect and peace. No matter who you are and who you love.”

Well, these two-top and two-bottom Whoppers sure have put a smile on our faces, so mission accomplished!

This is just the latest example of Burger King showing support for the LGBTQ community in wholly unexpected ways. Two years ago, Mexico’s version of the chain celebrated Pride Month by changing their logo to Burger Queer. In 2019, they gave us an ad featuring an adorable European bear couple getting married with a “Whopper diamond,” and that followed up a Super Bowl ad with Andy Warhol that we shouted out as one of the only queer references to be seen during football’s biggest night. And who could forget in 2014 when San Francisco Burger Kings sold Whoppers with rainbow wrappers that said, “We are all the same inside.”

Of course, this year’s Pride Whoppers have Gay Twitter™ all in a tizzy. Here’s what they have to say…

Me watching the gays eat either the top or bottom whoppers pic.twitter.com/KnZlHQgzsm

So a regular whopper is a vers king???

when you order the pride whopper, do they ask top or bottom????

I love this month. pic.twitter.com/gLGWVcxcJx