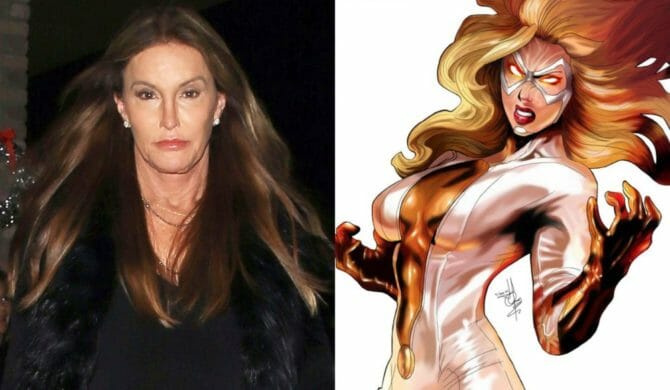 In Variety’s recent issue on transgender Hollywood, Caitlyn Jenner revealed that her dream acting role would be to play a Marvel movie.

“In a Marvel movie, I want to play the baddest-ass lady you’ve ever seen in your life,” Jenner said. “They got the wicked queen or the wicked lady. Just do the makeup and the outfit. And I got the deep voice.”

Before she transitioned, Jenner co-starred on TV’s “CHiPs” and she once auditioned for “Superman,” ultimately losing out to Christopher Reeve for the iconic role.

Jenner said that she had a difficult time after she won the gold medal at the 1976 Olympics decathlon. “I got all these issues inside me,” she said. She remembered asking herself, “Did I build up this character so big that I’m stuck with Bruce for the rest of my life?”

“And it scared the hell out of me,” Jenner said. “And then four months later, they call up: ‘Would you be interested in a screen test for ‘Superman’?” She auditioned, but she was relieved when she didn’t get the part.

“It was just too much for me,” Jenner said. “I would have gone down as the most macho guy in the world, and that’s not me. It’s not even close to being me.”

But what Marvel villainess would she play?

There are plenty of intense female villains in the Marvel universe, though choice of one would depend on a lot of factors, including which franchise.” With Cate Blanchett carving out her corner of the Marvel Cinematic Universe as the powerful Hela in Thor: Ragnarok, Jenner might have a better shot over in the X-Men world — though with the Disney/Fox deal that might end up being the same playground.

Maybe Jenner could have a turn as the Mister Sinister cone, Miss Sinister. Of course, there don’t appear to be any real plans for Jenner to play a Marvel villainess, but if there ever were, Jenner is prepared to draw on her own experiences to bring the character to life.

“That’s why I want to play that bad-ass bitch,” she said. “I can play that girl.”