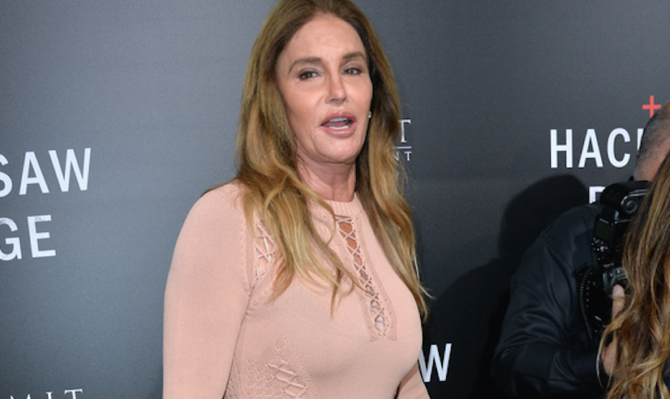 You’ll have to bear with Cait as she tells this story — and really it’s a funny story, we’re all going to be laughing soon — about how she came to be photographed in a Trump “Make America Great Again” hat mere days after the president announced a ban on transgender people in the military.

When she put on the hat, she didn’t realize she was putting on the hat, if you know what we mean. Oh, you don’t?

Well here’s how TMZ tells it:

Caitlyn tells TMZ she drove from her Malibu home to Sherwood Country Club in Thousand Oaks, CA, in a 1960 Austin-Healey convertible. Before leaving home she realized she needed a hat … something better than a golf visor to protect her hair. So she rummaged through the 10 hats in her closet and grabbed one without looking at the stitching.

Classic. We can’t tell you the number of times we’ve accidentally worn racist, xenophobic slogans on our foreheads in the company car, which, incidentally, happens to be a 1960 Austin-Healey convertible.

But the story is far from over:

She tells us she was horrified because she now detests Trump after he tweeted about the military transgender ban. Caitlyn says, “What he’s doing to our community is absolutely f***ing awful.”

But Caitlyn had a dilemma on her hands … wear the hat home or screw up her ‘do. She chose the former, thinking no one was going to spot her. She wanted to stop at a Starbucks for a latte but exercised caution … a mile from the coffee joint she switched to the golf visor and walked inside.

When Caitlyn left, she switched again, deciding to wear the Trump hat home. She got halfway to her property when she realized she left her purse at Starbucks, which contained, among other things, her cellphone. Caitlyn panicked and raced back to retrieve her purse, forgetting she was wearing the hat.

She ran inside, grabbed the purse and drove home. At some point she realized she still had the hat on but thought she could make it back undetected. She was wrong. Caitlyn says a photog snapped the pic somewhere between Starbucks and her Malibu home.

Some day they’ll make a movie out of this.

As for the hat, Caitlyn has some strange plans moving forward:

She’s thinking of signing it and auctioning it off and giving the proceeds to a transgender cause.

And who wouldn’t want to own this piece of history?

“I apologize to all of the trans community,” Jenner added to TMZ.  “I made a mistake. I will never do it again and I’m getting rid of the hat.”

down and out
41 comments