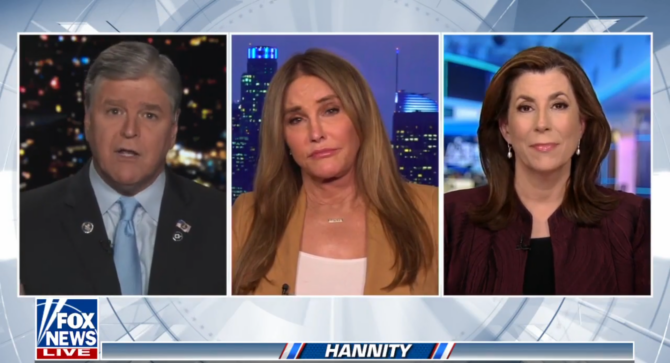 Jenner, who really needs to get a new hobby, said Thomas’ interview focused on how much happier she is since transitioning, a happiness which Jenner credits not to Thomas living her truth but instead to her winning medals “at the expense of the other female athletes.”

Fellow guest speaker and Fox News shill Tammy Bruce then made the discussion about Thomas herself, stating that “it is about character; it’s about selfishness, it’s about self-indulgence, it’s about narcissism.”

Jenner had begun the segment by saying that the “fault” of the situation was with the NCAA and not Thomas, but immediately switched to agreeing with Bruce’s wholly negative assessment of Thomas’ character the second it was brought into question.

Related: Caitlyn Jenner just said another really stupid thing and we can’t even with her anymore

Things went even further off the rails when Jenner insisted that she herself still has an advantage in golf after seven years of transitioning and would never compete in women’s golf, and that Thomas “has a lot left over” though having undergone hormone replacement therapy for over the NCAA’s one year requirement.

For the record: Jenner herself competed in an LPGA tournament just a year after beginning her transition, but who keeps track of things like that?

Jenner went on a long Twitter tirade against Lia Thomas and trans athletes on Wednesday–the first day of Pride month–as a continuation of her appearance on Fox & Friends that same day.

The woke world we are living in today is what has allowed for Lia Thomas to compete and take away medals from biological women.

Transitioning comes with responsibility and integrity. It seems to be lacking in this case where it is all about her happiness at the expense of female athletes. Not OK. The system is broken!

With all the attention Jenner is receiving over this from the conservatives she’s so desperate to please but who will never actually accept her, we fear we might not hear the end of her on this situation any time soon.