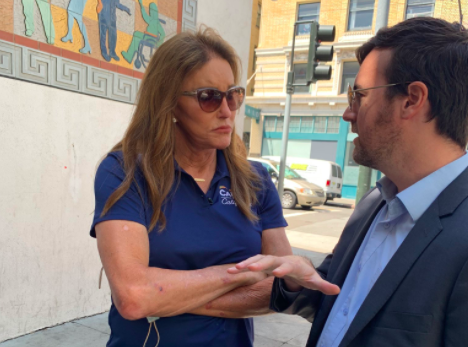 Caitlyn Jenner took her doomed gubernatorial campaign to San Francisco yesterday, where she toured the city’s Tenderloin district, a neighborhood plagued with homelessness, crime, and illicit drug use.

“[Gov.] Gavin [Newsom] is spending millions of dollars and getting no results whatsoever,” Jenner told local media as she eyed the streets with disgust. “It’s getting worse! Where is all this money going?”

The statement was ironic considering that Jenner’s campaign is over $156,000 in debt after burning through more than $910,000 on stuff like  staff meetings and  transportation. Just last week, she had to donate $25,000 of her own money to try and keep her campaign afloat with three weeks still to go before the election.

The 71-year-old reality TV star, who doesn’t believe in global warming or mask mandates, went on to say that there needs to be a change in how city and state leadership tackles crime and homelessness, though she didn’t actually offer any details about what she would do, other than strip money from non-profits who she doesn’t think are doing a good enough job.

Last month, Jenner suggested rounding up all the homeless people in California and dropping them off in “an open field out in some place” where they can presumably kill each other off without disrupting the rest of society.

“We have to provide some place for those people to go, whether it’s an open field out in some place,” Jenner told Inside California Politics, adding, “The crime rate is going up … It’s mostly homeless-on-homeless murders. We can’t have that in our streets.”

In addition to her campaign operating in the red, Jenner’s poll numbers are absolutely abysmal. A survey conducted by the University of California, Berkeley’s Institute of Governmental Studies and the Los Angeles Times found she was polling at just 3%, down from 6% a few months earlier.