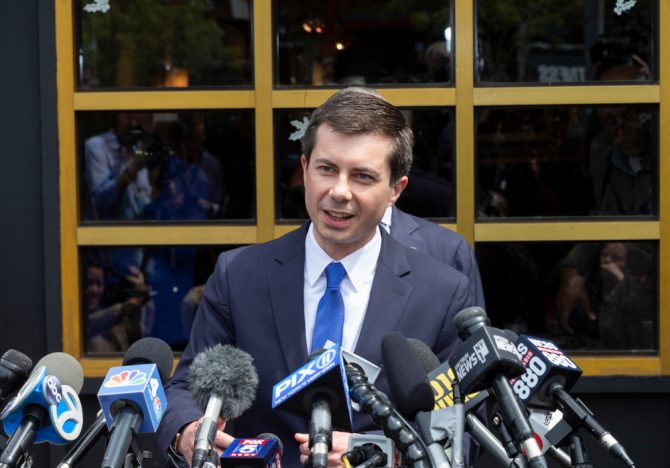 The camera never lies, though we can help it bend the truth with filters and touch-up tools. If only history were as amenable to airbrushing. In these days of cancellation and retroactive punishment for things done and said in the distant and not-so-distant past, it’s never too late to face the court of public opinion.

Take, Pete Buttigieg, who just can’t seem to get it right on the subject of race. Last month, the candidate for the Democratic Party’s presidential nomination conflated his experiences as a gay white man to the black American experience, a comparison that earned him criticism from Senator Kamala Harris, a former candidate for the Democratic nomination, as well as many of the black voters he’s now clumsily courting.

But his most damning comment thus far is one he made way back in 2011 when he was a 29-year-old candidate for mayor of South Bend, Indiana. The Root writer Michael Harriot excoriated Buttigieg for it in a brutal November 25 takedown titled “Pete Buttigieg Is a Lying MF.”

Here’s Buttigieg’s alleged lie: “The kids need to see evidence that education is gonna work for them. You’re motivated because you believe that at the end of your educational process, there is a reward; there’s a stable life; there’s a job. And there are a lot of kids — especially [in] the lower-income, minority neighborhoods, who literally just haven’t seen it work. There isn’t somebody they know personally who testifies to the value of education.”

Now, to be clear, I don’t think Buttigieg is a lying MF. He said what he said nearly a decade ago, and technically, what he said contained enough truth to make sense. If anything, maybe it was a lie of omission and oversimplification. Economics deserve a lot more credit than a lack of successful educated role models for keeping young blacks out of college, and systemic racism is the elephant in every classroom that makes success seem like an impossible dream.

As for equating the discrimination he’s faced as a gay white man with the discrimination black people face for being black – something we can’t hide in the closet … or with whiteface – he’s not the first gay white guy I’ve heard go there. I get what they’re saying, but, look, it’s not the same. A Grindr date making a poor analogy is one thing, but a presidential candidate should know better.

While he’s committed no major crime against blacks, Buttigieg’s current trending headlines, particularly the ones related to The Root story, are just another example of how the things we say in the past – especially when they suggest racism, homophobia, sexism, and/or a lack of wokeness about all of the above —  can come back to haunt us in the present tense. Add Buttigieg to the list of VIPs who have experienced it firsthand: Hulk Hogan, Liam Neeson, Mel Gibson, Paula Deen, and, most recently, Britain’s Prince Andrew, among others. Even if their careers recover, their reputations aren’t always so fortunate.

Can they use the “I’ve evolved” argument that Kevin Hart kept reciting earlier this year when a past homophobic comedy routine and assorted anti-gay tweets threatened his Oscar hosting assignment? Homophobia might be surmountable (Hart quit the Oscar gig and, for the most part, retained his fan base), but with offenses like sexual assault against women and racism against blacks, public opinion neither recognizes a statute of limitations nor offers easy forgiveness.

Dear formerly unwoke VIPs: If you’ve truly evolved, show, don’t tell. The problem with many celebrity mea culpas  —  like the one Hart belatedly offered the gay community, after days of refusing to do so — is that they often seem inspired more by PR concerns than genuine remorse and understanding of why their words or actions hurt people. It takes a lot more than a canned apology or phoning a journalist who called you a name (which is what Buttigieg did after The Root story went viral) to earn sympathy or forgiveness or votes.

The operative word is “earn.” One has to back up claims of contrition (and that old standby: “I’m not racist”) with actions, and not ones that just involve throwing money at a high-profile charity or posting something on social media. I’ve never associated Liam Neeson with black activism, but his life since his admittedly racist impulse 40 years ago supports his claim that he’s a different person now and that he no longer thinks one black man can pay for the sins of another.

Four decades, though, is a long time to shoulder the burden of proof. After assuming responsibility, a truly reformed racist can kick-start redemption by becoming an ally in deeds, not just words, by reaching out to the black community and engaging in honest, open conversations. That’s a lot of talking and doing for Buttigieg in less than a year, but if there’s truly a will, he’ll find a way.

I don’t mean photo ops at black churches. That’s the political equivalent of “Some of my best friends are black.” After years of seeming indifference to civil rights (and, some might say, passive racism), Robert Kennedy went deep into black communities in the late ’60s, earning the camaraderie and admiration of those constituents and ultimately reinventing himself as a staunch defender of the disenfranchised, “the most trusted white man in black America.”

Since he can’t go back in time and marry black (a potential First Husband of color might make him practically unbeatable), Buttigieg would do well to study the American civil rights era of the ’60s and then follow Kennedy’s bold example. If he truly cares about black people and isn’t just out to get their votes, he needs to put in the work to prove it. Becoming involved with groups promoting racial equality, talking to black leaders and listening to them —  really listening to them —  and working with them to improve race relations wouldn’t be just a good political move. It’s something he should have been doing all along.

Whether past misdeeds or clunky reasoning should haunt a person retroactively, the passage of time won’t be on his or her side when it comes to certain offenses. For Buttigieg, winning black friends and influencing black people will require decisive action. If he wants the black vote in 2020, he needs to prove he’ll still be on our side in 2021 and after.