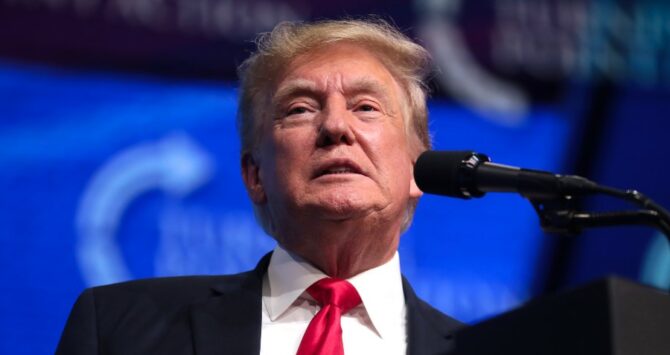 This just in: Donald Trump‘s latest business venture is an even bigger dumpster fire than anyone predicted.

According to the Daily Beast, the rollout for the ex-president’s new social media platform, Truth Social, is not going well:

In recent weeks, sources have heard the former president on the phone swearing gratuitously and asking things like, “What the f*ck is going on” with Truth Social.”

The Daily Beast also notes that a preliminary report by SimilarWeb, which tracks website traffic from public and private sources, shows the site is doing “either worse or the same” as several other MAGA social media sites, including Gab, a pro-Trump competitor website popular among neo Nazis, and Gettr, a right-wing platform created by former Trump aide, Jason Miller.

According to SimilarWeb’s estimates, Truth Social, which is being overseen by former dairy farmer/GOP congressman Devin Nunes, saw a sharp uptick of roughly 2 million daily visits when it first launched, but traffic quickly nosedived to approximately 300,000 daily visits shortly after that. That’s about the same number of visits as Gettr, and far less than Gab, which saw around 650,000 daily average visits during the same time period.

To add insult to injury, Truth Social is trailing both Facebook (#5) and Twitter (#22) on Apple’s AppStore, coming in at #72 last week.

The relatively light traffic could be explained in part by Truth Social’s waitlist—MAGA fans who want to join the platform have now racked up a million-strong backlog of users looking to join during the app’s soft launch. The app is also only available on Apple devices, denying access to owners of Android phones.

The extreme-right Gab, however, has managed to rack up twice the web traffic as Truth Social, despite its mobile apps being banned from both Apple and Google’s app stores.

Starting to think that when Donald Trump and Devin Nunes said register for the Truth Social app it really meant get a free appetizer at Mar-a-lago on Tuesdays only between 5pm-5:15pm. #morningjoe #TruthSocial #GOPTraitors pic.twitter.com/jkYDFy3QnV

Good morning to all the investors in truth social… pic.twitter.com/d1fpLkpdlE

Truth Social is as tangible as Trump’s healthcare plan.

Trump Steaks, Trump University, Trump Airlines, and Trump’s presidency all failed. They tried to break the curse by naming his social network Truth Social, and that didn’t even work.

C’mon guys ‘Truth social’ is not a complete failure, it got devin nunes out of Congress.

Next week Truth Social is going to be for sale in the clearance bin at the Dollar Store.

So the guy who failed at his SATs, his casinos, his steaks, his cologne, his airline, his board game, his scam university, his vodka, his water, his marriages, his re-election, his coup and his blog is failing at launching his stupid Truth Social app?

Devin Nunes has left the sinking Truth Social and will become CEO of Blockbuster Video.