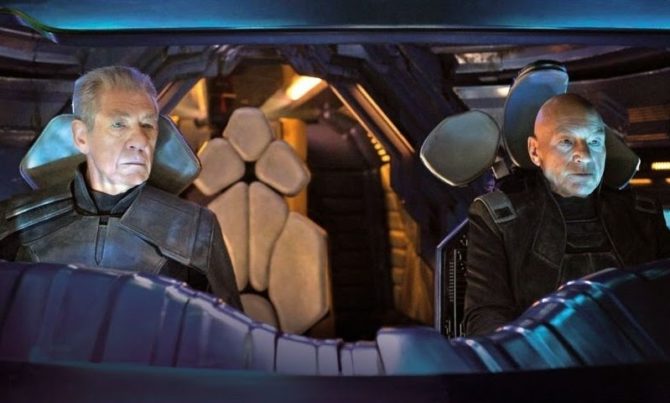 The Opus: X-Men Days of Future Past

Maybe it’s our sadness over the conclusion of WandaVision, but this weekend has us craving some serious mutant action. Long before the Marvel Cinematic Universe started raking in the bucks, 2000s X-Men proved that comic book properties had a built-in audience, and could attract big-name talent, make subtle commentary on social issues facing society, and have a degree of verisimilitude that would make even an absurd premise as super-powered mutants seem plausible. The very uneven catalog of X-films that followed hit an epic peak in 2014 with the release of X-Men: Days of Future Past, a film that combined the casts of all the prior movies into one mammoth story.

In the distant future, the world has become an apocalyptic wasteland thanks to mutant persecution by giant killer robots called Sentinels. The few surviving X-Men–led by Magneto (Ian McKellen) and Professor X (Patrick Stewart)–devise a plan to send Wolverine’s (Hugh Jackman, jacked as ever) mind back in time to the 1970s. There, he must unite the younger versions of Magneto and Professor X (Michael Fassbender and James McAvoy, respectively) to prevent the rogue mutant Mystique (Jennifer Lawrence) from assassinating a prominent scientist. Should Wolverine succeed, he can prevent the Sentinel wars of the future, and save all mutantkind.

Days of Future Past has one Hell of a cast roster which, in addition to the aforementioned, includes Elliot Page, Halle Berry, Nicolas Hoult, Peter Dinklage, Evan Peters, Omar Sy and Anna Paquin. Beyond that, as with the best of the X-movies, the film also works as a queer metaphor: the wisdom passed on by the Wolverine/Older Xavier/Older Magneto team to a younger generation in hopes of preventing a genocide feels a lot like the survivors of AIDS and systemic homophobia warning an emerging LGBTQ generation not to be complacent, lest they suffer the same fate. The movie features a number of prominent queer actors (including McKellen, Page and Paquin), and the shape-shifting powers of Mystique feel like a literal representation of gender and sexual fluidity.

Of course, we’d be remiss not to mention the film comes from gay director Bryan Singer, a man known as much for his personal scandals as his movies. As with any number of other figures “canceled” for their transgressions (Kevin Spacey, Woody Allen, Roseanne Barr, Brett Ratner, Bill Cosby, Harvey Weinstein), Singer may never work again. That does not, however, negate his creative accomplishments here. While it’s possible to interpret elements of Days of Future Past as reflecting Singer’s personal woes (Professor X’s drug habit is the most obvious), the movie does not try to normalize any kind of sexual exploitation. Contrast that with the work of Woody Allen, who constantly tries to normalize the sexual relations of older men with barely legal or under-age girls in his films. In other words, Days of Future Past does not have any kind of ulterior motive buried in its plot, nor does it constantly remind viewers of Singer’s alleged sexual assaults.

In sum, then, Singer may be a vile person, but that doesn’t make Days of Future Past a vile film, nor does it negate the outstanding work of the other cast and crew that helped make the film a success. Epic, thrilling, and teeming with queer allegory, we suggest giving it a watch to aid with the WandaVision withdrawal, and as the most successful use of the X-Men on the big screen to date.

Note: Days of Future Past exists in two versions, one from its theatrical release, and a longer version known as the “Rogue Cut” which reinserts several deleted subplots. Watch the Rogue Cut; it is the better, more satisfying complete version of the film.